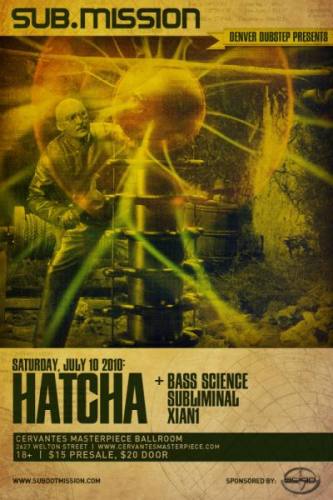 Sub.mission Presents...
HATCHA
http://www.myspace.com/djhatcha
"No one DJ or indeed producer can claim sole credit for dubstep . But when the history of the genre gets told, no DJ has ever had, or perhaps ever will again have so much influence over the course of the genre as Hatcha. It’s no overstatement to say the entire genre bares his stamp."
Martin Clark - blackdownsoundboy.blogspot.com
Hatcha is Croydon's answer to Moodyman and has over 18 years of DJ experience under his belt. Following a job as A&R man and shop hand at the legendary Big Appple Records, Hatcha became the first main DJ behind the now worldwide recognised Dubstep genre. He also mixed the very first " "Dubstep Allstars" compilation (and volume 4 alongside Youngsta), making his name as the Godfather of Dubstep.
Going on to DJ all over the world and release on some of the genres leading labels, Hatcha holds his weekly radio show on Kiss FM alongside Crazy D and was the first DJ to host a commercial radio show based soley around Dubstep.
With 2010 promising to be even more successful with the launch of Hatcha's new Sin City label and events alongside fellow Dubstep legend N Type , a host of big gigs already confirmed, as well as remixes, orginal productions and some big collaborations, Hatcha has and will continue to firmly cement his name in music history.
Mixes: http://www.newmixes.com/tag/hatcha
BASS SCIENCE
http://www.myspace.com/basssciencecrew
Bass Science started in the summer of 2007 as 2-man Live P.A., making Dub-hop / Glitch step bass music. Bass Science fuses dubstep, glitch hop, IDM and dub into a fresh new sound that is simultaneously filthy and extremely clean. In less than a year since their inception, they have created a prolific body of work and electrified dance floors across the globe: call it glitchstep, call it dubhop, call it what you will, Bass Science’s hybrid sounds are generating a cabinet-rattling buzz. In the past 2 years they’ve dazzled crowds at seminal festivals and clubs from UK’s Glade to LA’s Low End Theory, with globetrotting gigs spanning Asia, Europe and the US and sharing stages with STS9, Flying Lotus, Nosaj Thing, Eliot Lipp, and more. Bass Science’s tracks, meanwhile, have received enthusiastic support from influential DJs like the BBC’s Mary Anne Hobbs and Annie Nightingale, Resonance FM’s Nick Luscombe, with regular rotation on Dubstep.FM. 2010 is a changing of an era for Bass Science. Captained by Mattb, Bass Science has transformed from the live p.a. set of the past into a live hybrid act with the inclusion of Devin Landau, a drummer native of Chicago, IL. Rooted in jazz, funk, hip-hop, punk, and dnb, one could expect a complete transition from the day-to-day “dj experience” into something more rocking than your senses are ready for. He can stomp it out, and slap it around, all in the blink of an eye. The new live set covers all the bases, with material from Mattb, Bass Science, and RND, melding a live experience with flavors of deep, rootsy dub, gangster-ass glitch, and banging low-end dubstep. Don’t turn your back on us, because Bass Science will continue to blow up, and not just the sound systems.
XIAN1
http://www.myspace.com/xian1bass
SUBLIMINAL
Cervantes Masterpiece
$15/$20
9pm-2am
About | Advertise | Contact | FAQs | Terms of Use | Privacy Policy | Accessibility Policy © 2022 - TheUntz.com. All rights reserved.