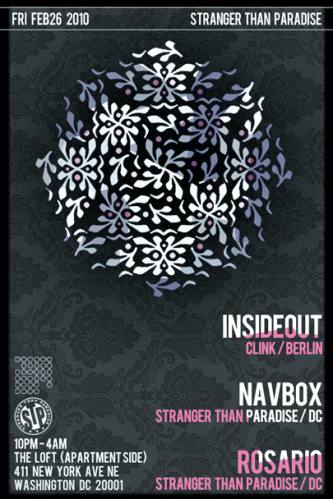 What: Stranger Than Paradise Loft Edition

Fri, Feb 26, 2010
Doors 10PM, 21+
The Loft (Apartment Side)
411 New York Ave NE
Washington, DC 20001
DJs:
Insideout
Clink Recordings | Berlin
http://myspace.com/loseyourmind
http://clinkrecordings.com
NavboX
http://myspace.com/navbox
Rosario
http://myspace.com/rosbox
Grant Aaron, aka Insideout, is co-owner of and recording artist on Clink Recordings. Grant began DJing in 1997, mainly influenced by the striped down sounds of Daniel Bell, Plastikman and Mike Ink. It didn't take long for those influences to persuade him to move from behind the decks to the studio. His first original sounds came in the form of Ambient and Experimental with a full length album titled, Embrace. This was released on his experimental net-label, Lifeform Project, which he started with several producers from his hometown of Atlanta. That was just the beginning.
Grant's track selection and mixing is seamless and we recently had the pleasure of hearing him drop an impeccable set in Boston. We're glad he's joining us in the oh so intimate apartment side of the infamous Loft, which has gone through a recent sound and decor upgrade.
NavboX & Rosario will start things early at 10pm and continue throughout the night with deep, tech-house and minimal. Drink specials and reduced entry before midnight, details TBA. Space is limited so we will close the doors once capacity is reached.
Check out Rosario's latest podcast for MurmurDC.com:
http://www.murmurdc.com/2009/12/16/murmur-dc-podcast-episode-11-rosario/
NavboX's latest podcast for Adventures of Soul Clap:
http://blog.soulclap.us/2009/10/28/episode-56-the-adventures-of-navbox/ 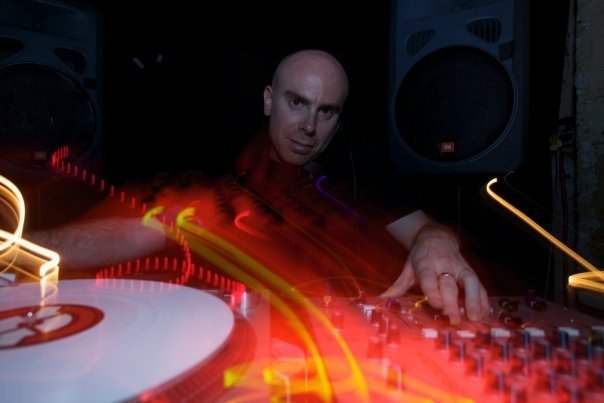