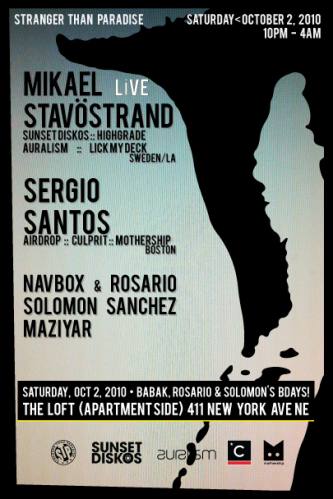 
The Loft (Apartment Side)


This edition of Stranger Than Paradise at The Loft features one of Sweden's finest techno exports Mikael Stavostrand and Boston's afterhours king Sergio Santos.  Not to mention our resident DJ Rosario, fellow DC maestro Solomon Sanchez, and Babak's birthdays!

No to be missed!

Mikael Stavostrand has been lauded as a key figure of the Swedish electronic music scene for his unique interpretations of minimal club techno as well as for producing some of the most essential experimental electronic music of the past years. Stavöstrand mixes deconstructed sounds with funky little beats to create minimal dance textures. On his debut album on Force Inc., "Reduce", swarms of glitches, crackles and skips infiltrate the 4/4 drive formula of minimal techno. As Vita, his "Vita" 12" on Force Inc. imprint Force Labs was welcomed by critical praise and became one of the best selling releases with its digitalized organic groove.

He started to produce music in the early nineties, but back then he was a part of the industrial scene and released some now labeled as "classic" records under different names. Lately due to a lot of demand from different labels, he agreed to allow reissues of these early works.

Boston's tastemaker Sergio Santos has performed in DC several times now, each time better than the last. Since his last performance at the Loft with partner Tanner Ross a couple months ago, he's been busy moving people at parties such as Mixmag in London, Love in NYC and his motherland of Portugal.

Along with studio whiz Tanner Ross, they've released music under labels AirDrop, Mothership, Jonny White’s No.19, and Trapez with more on the way.