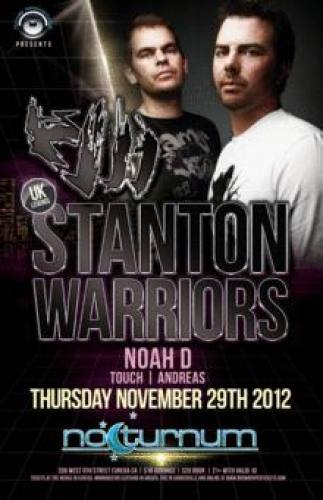 True pioneers of a sound that broke all the rules back in 1998, Stanton Warriors took garage and twisted it beyond all recognition, dropping speaker shattering bass lines and massive beatsall to devastating effect. Stanton Warriors had arrived.

In 2001, Stanton Warriors laid down a fresh new sound with the seminal 'Stanton Sessions' that was instantly signed to XL Recordings. The mix saw off competition from Fat Boy Slim and Deep Dish to win Best Album at the Dance Star Awards, and again at the Muzik Mag Awards where they beat Dave Clarke and Danny Tenaglia, whilst the mix recently featured in Mixmags top 50 best compilations ever industry poll. 'Stanton Sessions' went on to become the biggest selling breaks album of all time  a feat as yet unsurpassed.

Overnight, Stanton Warriors became the hottest producers on the planet, and today they continue to stay at the very pinnacle of their profession. High profile remixes for such luminaries as Missy Elliot, Fat Boy Slim, Basement Jaxx, Mylo, Freeform Five, and Busta Rhymes amongst others constantly fill their diary, whilst their own original material continues to push the boundaries of musical excellence.

They are also incomparable when it comes to working with vocalists. In a scene renowned for instrumentals, Stanton Warriors have jetted around the world to record with vocal talents that include Big Daddy Kane, Twista and The Beatnuts, implementing house, electro, hip -hop and funk elements into their sound.

In 2006 Stanton Warriors signed their debut album 'Lost Files' to V2, becoming one of the first breaks act to sign to a major. Released to massive critical acclaim, 'Lost Files' received support from a variety of djs across a variety of different scenes, with major support from MTV and Pete Tong on Radio 1. The album was also play listed to Radio 1 & XFM daytime shows plus countless other stations around the world.

Last year Skint Records brought together Dom and Mark's killer versions of Gorillaz' 'Feel Good Inc', Alter Ego's legendary 'Rocker' and Azzido Da Bass's 'Dooms Night' amongst a great deal more on 'Remixes'. The compilation perfectly showcased the Stantons sound and made it clear why DJ Mag included them in their recent list of the '50 Best Remixers Of All Time'.

Their most recent accolades include their placing as Number 1 djs at Breakspoll and Number 1 breaks djs in DJ Magazines Top 100 for the past two years in a list awash with trance and house djs. The awards are testament to having played at every major festival and super club around the world  treading an international path that few djs can rival.

Stanton dj sets are famed for incorporating exclusive original tracks mixed with homemade edits / remixes of cutting edge sounds from underground house through to abstract hip hop and everything in between. It's all blended into a melting pot of low down booty electro punkishness, and is continually reminding the world why Stanton Warriors have remained unrivalled in their genre for more than a decade.

San Francisco-based Noah D is an electronic music composer and enigmatic and saturated live performer.  A producer's producer, his heavy and hypnotic bass music is preceded by an expectation of the uncommon mastery that comes with a classically-trained background coupled with over 10 years production experience. While his work can deliver aggressive and substantial tracks, the sound avoids the overt focus on noise that characterizes the harder bass music genres. An expert at slipping from the hard to the smooth and sexy, Noah D carries a history of drum & bass, hip hop, live guitar, and West Coast bass music into the present.

Before 2008, Noah D released on popular Drum & Bass labels such as Renegade Recordings, Human Imprint, Trouble On Vinyl and Pure Vibez and gained support from leading acts in his genre such as DJ Hype and Dieselboy. A year later he received recognition and support from Skream, Bassnectar, N-Type, and Plastician, with play on BBC's Radio 1, Rinse FM, and Kiss for his anthem track "Seeeriousss." His pioneering contributions to the now-popular dubstep movement brought a signing to LA-based SMOG records in 2011 with the release of his debut LP in Spring 2012. Noah D's 'Perspective' LP features collaborations from talented vocalists in the areas of hip-hop, dancehall, grime, and r'n'b and showcases the reputation for depth and diversity that precedes him.

While his original productions are designed to become the soundtrack to his fans daily lives, the energy of Noah D's live show is said to be one of the best in the business. Tuning into the aesthetic that is unique to each crowd and room, performing in the traditional freestyle DJ method is a skill he still enjoys flexing. Every set is different and constantly evolving moving through various tempos and moods.

"All these styles can work if you pick the right moments and then I find the set to be more free flowing, exciting and memorable. Almost taking on a life of it's own."

On the horizon, Noah D is looking towards the Winter 2012 release of his "Fire Alarm" EP through SMOG Records, as well as variety of singles that allow him the freedom to test the waters as bass music evolves. With the family vibe on the SMOG crew, and his interest in keeping US Bass Music releases reflecting the diversity of sound in the genre, we can forecast the unpredictable. The only rule for Noah D is "If it doesn't move me, then I'm not interested". 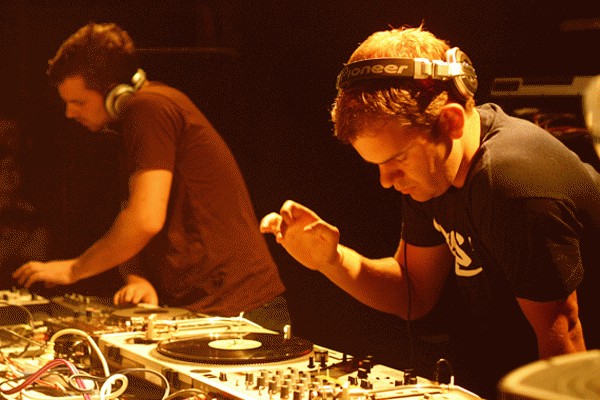