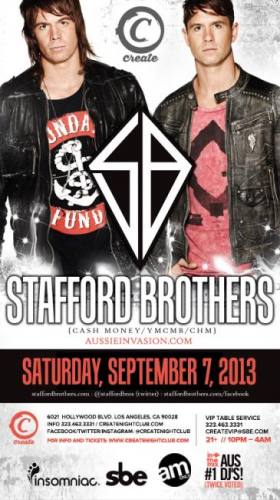 What: Stafford Brothers at Create Nightclub

The Stafford Brothers are undoubtedly the hottest story in “Down Under” dance music invading the great continents of the globe as the Aussie onslaught of EDM madness continues from Sydney to San Francisco, London to Los Angeles. Twice voted the number one DJ’s in Australia in as many years (ITM Awards) brothers Matt & Chris Stafford are now based in the U.S, with residencies in New York, Las Vegas and Hollywood. They are the first DJ’s to have their own network TV show currently syndicated in over twenty countries, have recently remixed artists as diverse as Timbaland, Wolfgang Gartner, Snoop Dogg & Akon and are the only DJs to be asked to rework the official theme song of arguably one of the biggest sporting team on the planet, Real Madrid. World domination is imminent as the press announce yet another historic moment in cross-genre pop culture music; the Stafford Brothers sign to Cash Money Records joining the YMCMB family with the likes of Lil Wayne, Nicki Minaj & Drake.
About | Advertise | Contact | FAQs | Terms of Use | Privacy Policy © 2020 - TheUntz.com. All rights reserved.