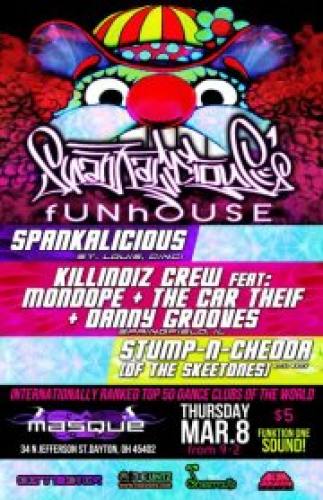 www.spankalicious.comHEYOKA, plays in Atlanta, New Orleans, Memphis, Denver with PRAANG, Chicago with Nit Grit. Direct support for SPHONGLE, BORGORE, SKISM as well as festival appearances at WAKARUSA, closing festival sets at SONIC BLOOM and TALL TREE LAKE have kept him on the move. Keep on the look out for upcoming dates as Spanky plans to make a stop in YOUR city soon!

Hailing from Springfield, IL Armando Zuniga aka “MonDope” is a fresh force to be reckoned with. Although he has only been performing and promoting for a short period of time, MonDope is no stranger to the scene. With an eclectic arsenal of music ranging from metal to hip-hop and underground, as well as many different forms of electronic music, there is never a dull moment in his sets. In the summer of 2010 Mondope came together with other local DJs to form Killinoize, a production company interested in bringing the new wave of bass music to Illinois’ own capitol city. Killnoize quickly gained a following of like-minded enthusiasts and bass heads in the region. Mondope’s sets are energetic and demand your attention. He will bring anything from glitch-hop to dubstep, drum & bass, crunk, breaks, funk and even jungle/reggae to the dance floor. Able to feel out any crowd at any moment, MonDope delivers a HEADY blend to get down to. Expect the best of this rising artist in 2011!

I like playing music. Just ask and I might play for you.
I love music and I love you!!!

Stump N Chedda of The Skeetones