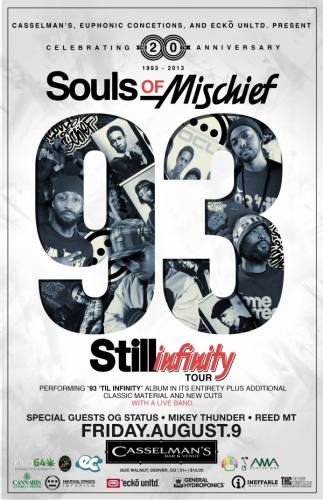 
Performing ’93 ‘Til Infinity album in its entirety plus additional classic materials and new cuts , with a LIVE BAND!


Souls of Mischief is a hip hop group from Oakland, CA, and part of the hip hop collective Hieroglyphics. Its members include A-Plus, Tajai, Phesto, and Opio. Souls of Mischief debuted in 1993 with their album 93 ‘til Infinity, released on Jive Records. They later released No Man’s Land (1995), Focus (1999), and Trilogy: Conflict, Climax, Resolution (2000).