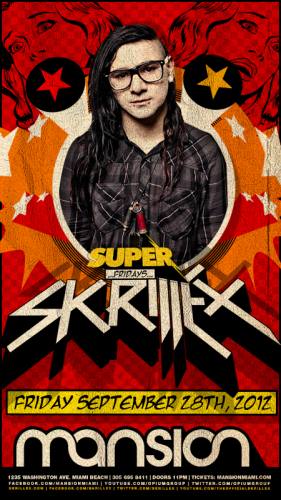 Sonny Moore, known worldwide to music enthusiasts as Skrillex, is one of today’s most buzzing EDM artist. This perception was fortified by the announcement of his 5 Grammy Award nominations in late 2011, including contention for Artist of the Year 2011. 23-year-old Electro, Dubstep, Glitch music producer won 3 Grammys this February and has generated media buzz surrounding his relationship with Ellie Goulding. He has jumped in the limelight for both fans of EDM and EDM critics. Moore’s status as an elite EDM producer and artist is the culmination of years filled with motivation, touring, and performing with various live bands before launching as a solo producer. Super Fridays presents Skrillex live at Mansion Nightclub in Miami Beach.