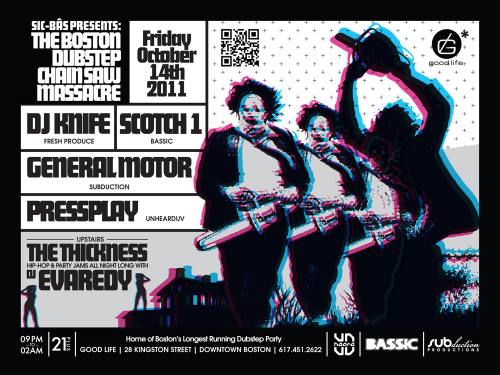 SIC BÅS is the dark alter ego of Boston's premier and longest running Dubstep night. It's been locked away for a long time, but now it can't be stopped! The heavy shredding basslines we've tried to hide for so long can no longer be tamed! They must be let out to rage and thrash among the speakers and bassbins that live in the Good Life's bassment. Boston has gathered together only the toughest DJ's to deliver these massive monstrosities of music to your ears! Do not be fooled this evening won't be for the weak. Put on your bass face for a night of more metal than your ma's kettle, and be ready to be amazed with heaviest wobbles and bobbles by the likes of DJ Knife, Scotch1, General Motor, and DJ Pressplay!

Knife is an intergalactically famous DJ and promoter who holds several residencies in Boston clubs. Well versed in reading crowds and able to seamlessly jump between different musical genres, Knife is the perfect fit for any function. Beware of NOT booking Knife because he will show up at your door step and pester you. Knife also loves the following: cutting, stabbing, slicing, dicing, shanking, spanking, drinking, laughing, bird calls, ignant discussion, learning from brophy, brodeos, quincy, utica, kind mommies, gwops and quaps.

Scotch1 grew up on mix tapes ranging from Dj Hype to DJ Dan. He began playing records in 1998, and has since played shows from Boston to Bali, with countless venues and parties in between. His main rule when playing: crowd control. From low-profile mood setters, to in your face smashers, Scotch1 can keep any dance floor filled.

General Motor is a beat fanatic. While he is firmly rooted in 4x4 beats...GM's sets seamlessly move from techno to house, wobbly basslines and vicious blends of cut time magic. His musical styling showcases his upbringing amongst some of the best in Berlin while cutting his teeth on this side of the pond.

A boston based DJ focusing on danceable synth leads surrounded by the dirtiest of bass lines. You will have a tough time standing still while listening to his carefully crafted mix sets which build slowly from the ground up, evenly distrubuting street-bass and purple-wow dubstep to your brain with hints of house, dnb, and drumstep mixed in.

And of course DJ Evaredy will be bringing the hip hop and party jams upstairs all night long.

Sound provided by The BASSIC SOUNDSYSTEM

Expect snares with reverb than the motherfucking grand canyon.