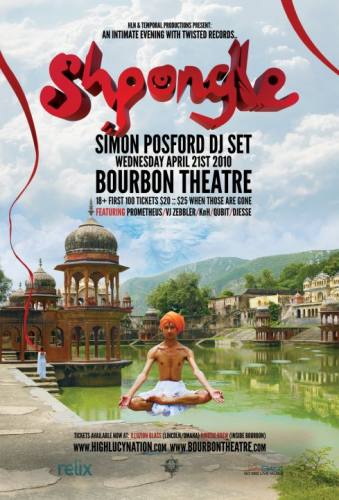 Shpongle (DJ) / Prometheus / VJ Zebbler Lincoln Ne
[IMG]http://i124.photobucket.com/albums/p25/KansasCityRaver/spongleinlincoln.jpg[/IMG]
[IMG]http://i124.photobucket.com/albums/p25/KansasCityRaver/spongleinlincolnback.jpg[/IMG]
:: Wednesday April 21st, 2010 ::
HLN & Temporal Productions proudly present...
SHPONGLE (DJ Set) - Outer Shpongolia, UK (http://www.myspace.com/therealshpongle)
Simon Posford, the producer, multi-instrumentalist and driving force behind Shpongle’s exploratory odyssey and sonic oddity, will delight fans new and old with tonal textures that break boundaries of convention while at the same time harnessing the primal energy of sound. The Shpongle experience is one of both worldly and otherworldly roots.
Shpongle, pioneers of modern musical psychedelia, will be embarking on a 26 city tour of the US to promote their new album, Ineffable Mysteries from Shpongleland.
The name "Shpongle" is not a dictionary recognized word; in an interview taking place in Russia, Raja Ram stated that "Shpongle" is an umbrella term for feeling positive and euphoric emotions.
Shpongle's first track, Vapour Rumours, was released on TIP Records' Infinite Excursions compilation in 1996. Their debut album, Are You Shpongled?, was released 1998 on Twisted Records. Their latest album "Ineffable Mysteries from Shpongleland" was released on November 28th 2009
PROMETHEUS - London, UK (http://www.myspace.com/twistedrecordsprometheus)
Better known as Benji Vaughan, is a British psychedelic trance musician. He has released music under many names, of which most well known would be his solo project, Prometheus, and his collaboration with Twisted Records label colleague, Simon Posford, under the moniker Younger Brother. His music is characterized by distinct basslines, high production quality, intense thematic development and unique or alternative approaches to the psytrance genre. He frequently combines diatonic melodic content with metallic or “glitchy” percussive polyphonic elements to form thick contrapuntal tapestries of sound. Although much of his music sounds like it was composed using equipment at the forefront of technology, it is not uncommon for him to use equipment now considered antique, such as the 1971 Korg micro synth that he used for portions of the second Prometheus album, Corridor of Mirrors.
VJ ZEBBLER - Boston, MA (http://www.myspace.com/zebbler)
Zebbler hails from Grodno, in Belarus, but has been based in Boston, Massachusetts, since 1996. He pushes the boundaries of immersive VJ performance, creating three-projector performances with synchronized surround sound. His interest in immersion carries him towards a psychedelic electronic abstract style.
Last year he played alongside Ozric Tentacles during his summer tour.
VJing is only one aspect of Zebblers creative persona, and as part of the collective Glitchcrew he created a LED guerrilla advertising campaign for a cartoon (ATHF) that triggered a city-wide bomb scare.
OPENING SETS BY:
K n H - Denver, CO (http://soundcloud.com/knh-1)
qubit - Omaha, NE (http://www.myspace.com/imqubiturnot)
DJesse - Lincoln, NE (http://www.soundcloud.com/djesse)
WE ARE PSYCHED TO HAVE LIGHTING BY:
Nexus Productions - Colorado (www.myspace.com/nexus_production)
Bourbon Theatre
1415 O St.
Lincoln, NE
18+ / First 100 tickets $20 :: $25 when those are gone
TICKET LINK: https://www.etix.com/ticket/online/performanceSearch.jsp?performance_id=1203411
$20 TICKETS AVAILABLE NOW AT:
- Illuzion Glass (Lincoln/Omaha)
- Kinetic Brew (inside Bourbon)
http://www.highlucynation.com/
http://www.bourbontheatre.com/
http://tinyurl.com/y5qbrct
http://www.facebook.com/#!/event.php?eid=300089315515&ref=mf
About | Advertise | Contact | FAQs | Terms of Use | Privacy Policy | Accessibility Policy © 2022 - TheUntz.com. All rights reserved.