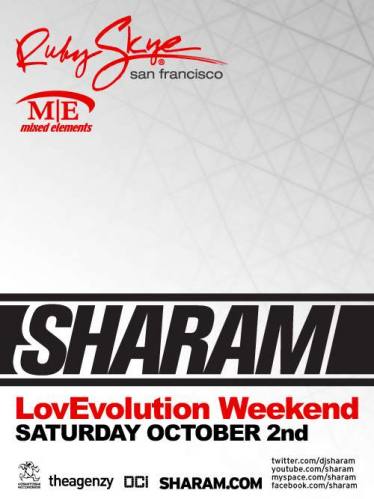 
Known simply by his first name SHARAM to the world of popular culture, Sharam Tayebi is a Grammy award-winning producer, songwriter, recording artist and DJ. His 18-year career has brought him to the world’s largest music venues and in the studio Sharam remains one of only few dance acts who can effortlessly navigate between the nocturnal world of dance music with underground hits like “Don’t Say A Word” and “Be The Change” while scoring Top 20 Hits internationally with “PATT (Party All The Time)” and “The One” featuring Daniel Bedingfield. He is also the driving force behind the legendary Yoshitoshi label in Washington DC using it as a vehicle to promote newly discovered talent from DC and around the world.

Born in Tehran, Iran, he has called our nation’s capital his home since 1985. And it was there, in the early Nineties, where he met Ali “Dubfire” Shirazinia by chance. They would later form the DJ duo Deep Dish putting the nation’s capital on the map for electronic dance music. Their reputation was cemented with their critically acclaimed debut artist album, Junk Science, followed by their second album, George Is On, which featured the vocals of Stevie Nicks. Simply stated by Rolling Stone magazine, “The Deep Dish sound personifies cool.”

In their time together, the duo re-worked classics from the likes of Madonna and The Rolling Stones to Justin Timberlake and Janet Jackson into international club hits, and also crafted the musical backdrop for VERSACE haute couture fashion shows in Milan and Paris. Deep Dish received scores of accolades and awards for their remixes including The Recording Academy recognizing their achievements with four Grammy® nominations and finally the Grammy® Award in 2002 for “Best Remixed Recording” for Dido’s “Thank You.”

None of this would matter unless Sharam’s music connected with people. From performing in front of thousands at the infamous Burning Man event to the most influential venues around the world, dance music purists go crazy for his musical choice and mixing technique, while mainstream audiences recognize Sharam (Persian for Calm City) for creating soulful dance music filled with striking vocals.

After a bountiful career as part of Deep Dish, Sharam became a solo artist in 2008 with the release of his UK top ten hit “PATT (Party All The Time)” — a rigorous rework of an old Eddie Murphy record which was produced by Rick James — followed by his collaboration with Daniel Bedingfield for “The One” and finally his debut double album, Get Wild in 2009. Always with the ambition to be diverse and progressive, Sharam collaborated with the likes of P. Diddy, Tommy Lee, and Chuck D., and even included a Patsy Cline vocal sample to complete this record with its Morricone-inspired Spaghetti Western theme. A serious movie buff, Sharam also made his directorial debut for the album’s single “She Came Along” featuring Kid Cudi.

Now, as Sharam prepares to set the stage for the overall aesthetic of his next album Speed, the avid car enthusiast will be driving a 1970s Dodge Coronet Super Bee Hemi — an all-American muscle car — in this year’s Gumball 3000 Rally. Musically he extends his passion for iconic automobiles with a series of three EPs being released under the “Mach” moniker inspired by the 1970’s Ford Mustang.