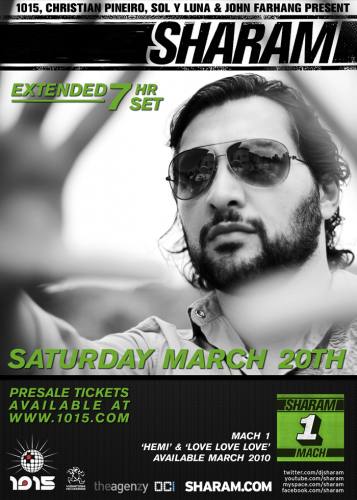 1015 Folsom proudly presents...
Sharam (Deep Dish)
With the arrival of his long-awaited debut disc GET WILD, in North America (Album is scheduled to launch worldwide this summer), revered electronic music trendsetter SHARAM makes his boldest studio statement yet. Counting superstar collaborations with everyone from Kid Cudi and Tommy Lee to Diddy and Daniel Bedingfield, SHARAM’s ability to draw such a vast talent pool is as impressive as his longstanding reputation for mesmerizing club crowds from Miami to Ibiza.
“I always believe in moving forward,” says SHARAM, known to many as one-half of the now-on-hiatus Grammy Award winning duo DEEP DISH. “Whether it’s the way I DJ or remix songs to the way I produce, there has to be a constant forward motion. This album was no different. That philosophy--to do something different without losing sight of what I’m known for--is what makes Get Wild what it is. People are always looking for something new from me and I pride myself on pushing the boundaries of dance music and taking my fans on an entertaining musical ride”
The 22 solely produced tracks on Get Wild span the full spectrum of dance music. Take the disc’s landmark “She Came Along,” which meshes elements of Patsy Cline’s legendary country song “Strange” with vocals by hip-hop sensation Kid Cudi, “This is really, really innovative. I haven’t heard anything like it: the Patsy Cline sample and how he blended it together and made it hip-hop too” says Kid Cudi. The end result is a masterpiece already being hailed as one of the most uniquely infectious genre bending songs of 2009 from Mixmag, Vibe magazine and slew of other publications to many of the upper echelon of producers including Kanye West.
DJ Taj
plus many more TBA!