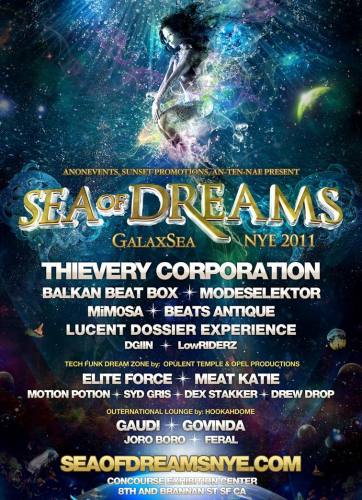 In 1996 Thievery Corporation released Sounds from the Thievery Hi-Fi; an album that defined an entire genre of music and crystallized their distinct “outernational sound” aesthetic. Over the next 14 years the duo would write and record four more critically acclaimed studio albums. Now Rob Garza and Eric Hilton have selected their favorite Thievery Corporation tracks and are set to present It Takes a Thief; their first retrospective album chronicling over a decade of revolutionary outernational sounds. With a rotating cast of instrumentalists and vocalists It Takes a Thief unfolds in a kaleidoscope of sonic color. The album showcases classic Thievery Corporation tracks like “Warning Shots” featuring incendiary reggae toaster Sleepy Wonder, “Vampires” featuring Afrobeat heir Femi Kuti, “Shadows of Ourselves” featuring multi-lingual Persian singer Lou Lou, and of course the hit track “Lebanese Blonde” featuring the late jazz chanteuse Pam Bricker. It Takes a Thief also features an exclusive, never before released track “The Passing Stars” featuring Pam Bricker. From the beginning, it's been remarkable to witness the growth of Thievery Corporation's fan base as it's steadily grown in such a DIY, organic fashion since the duo's first LP. "We were so inspired by Washington, DC's Dischord and the true do-it-yourself ethos of the DC punk scene that Rob and I both grew up on. A lot of great music reaches fans without the typical hype and fanfare enjoyed by bands on the majors. Music eventually finds its audience through a myriad of alternative routes. And when that connection is made, that bond is strong," says Hilton. Certainly that bond is so remarkably strong, that Thievery Corporation has been able to sell out the famed Hollywood Bowl, London's Shepard's Bush Empire, the Theatro Vrahon Melina Merkouri in Athens, Greece, and countless other legendary venues around the globe. Spreading their unique sound far and wide, Garza and Hilton were always great admirers and curators of dusty grooves and all but forgotten music styles. They borrow from the classically sensual and blunted sounds of their favorite Brazilian bossa nova, Jamaican dub reggae, vintage film soundtracks, Afrobeat, Latin and psychedelic rock to forge into new sonic territory.

Their name, their personal history and the enthusiastic media & audience reactions suggest a link with the so-called Gypsy Rock movement, but their scope is reaching way beyond that: Balkan Beat Box really transcend categories (pop, electronic dance music, world, rock) by creating a new breed of 21st century music, deeply connected to their folk upbringing yet forward-thinking, which appeals to audiences across the geographical and stylistic borders. Balkan Beat Box are an awesome live band, their energetic live shows have become legendary. They've been making crowds go wild at major festivals such as Bonaroo, Roskilde, Paleo etc, and will be touring again around the world throughout the year. Balkan Beat Box is centered around its two founders: saxophone player Ori Kaplan and drummer/programmer/producer Tamir Muskat (*). After having been active for over a decade in some of NYC's premier underground bands (including Gogol Bordello, Firewater, Big Lazy, Shotnez), they joined forces with charismatic MC Tomer Yosef and brought together their combined experiences  to create the powerhouse called Balkan Beat Box.

Modeselektor is an electronic music band formed in Berlin, featuring Gernot Bronsert and Sebastian Szary. The group draws heavily from IDM, glitch, electro and hip hop. Modeselektor produces all its material with self-developed software in Max/MSP and MIDI controllers. In 1999 Modeselektor signed its first remix contract and began working with Pfadfinderei, a Berlin based VJ and design collective. In 2000 Modeselektor met Ellen Allien, making Bpitch Control their home label. Modeselektor has also been involved in collaborative efforts; Moderat - a musical collaboration between Modeselektor and Apparat, Pfadselektor - a music/visual collaboration between Modeselektor and Pfadfinderei, and with Rhythm & Sound’s Paul St. Hillaire. They have produced sound installations at the Centre Pompidou in Paris and lectured at the Merz Akademie in Stuttgart.

Growing like wildfire under the canopy of live electonica and world roots music comes a masterful merge of modern technology, live instrumentation and seductive performance, built of brass bands and glitch, string quartets and dubstep: the musical trio Beats Antique. Since the group’s inception from the eclectic underground of San Francisco’s performance art scene, Beats Antique has been notorious for making it nearly impossible to sit still. They meld their mediums as attentively as they fuse the cultures that inspire their sound. All self produced and composed, the trio creates a unique collage: an animalistic, raw musical event that blurs the lines between the provocative, the spiritual, and the artistic, while still maintaining an allegiance to the muses of class and beauty. In a prolific 3 years since Beats Antique emerged, the group has released 2 albums and a pair of EPs, with a third album, Blind Threshold, on the way. Notable features of the new release include vaporous violins and Danny Elfman-esque dementia; glitchy, laser-guided harmonica provided by Blues Traveler frontman John Popper; and 2 very different vocal tracks that range between restless pop hooks and vibrant Eastern European dance loops. All wrapped into an intricate collection of heavy beats and sub bass.

Deep from within the Los Angeles

underground art and music scene comes the LucEnt dosSieR Experience. Best known for its Coachella water spectaculars, the circus troupe... reaches to the past and the future for its fantasy performances.Conceived in a blaze of collaborative creation this full production performance-art troupe embodies a newly awakened style of vaudeville glamour infused with their own magical blend of circus shenanigans. The unique inter-active choreography, inspired costuming, original music, mystical face and body artwork are all brought together by the spirited performers to create

Elite Force's music has been the soundtrack to many a movie, with a huge list of impressive A-list credits to his name, including the likes of the Matrix, Charlie's Angels, Arlington Road, Mortal Kombat, Crow, The Bone Collector, The Jackyll, Spiderman 2 and his music has appeared on a wide array of TV shows, from CSI to Top Gear, from Football Focus to LA Doctors. He's also soundtracked a number of computer games, including no fewer than 5 FIFA games, several of the Wipeout series, The Matrix and Motorstorm 1 & 2. On the decks, Elite Force has been a prime mover since 1990 when he cut his teeth playing huge student nights and self-promoted acid house nights in the South West of England, before moving up to London and ultimately gravitating towards his tech-funk style, with which he now has a full diary of global bookings. He has become known as one of the top technicians on a circuit that has included massive shows in Belarus, Hungary, Australia, Italy, USA, Czech Republic, India, Turkey, Spain, Japan, Georgia, Ukraine, Kazakhstan, and China, amongst others, as well as numerous festival slots including Glastonbury, Coachella, Burning Man, San Francisco's Love Parade, Wickerman and the Glade. He was also responsible for the hugely influential Strongarm Sessions webcasts which have become something of an institution since their inception back in 2001, receiving around 20,000 downloads per show.

Gaudi's eclectic style and versatility has kept him at the forefront of his field throughout a noteable and prolific career. His music, which is an organic fusion of dub, world and nu-beat, is in production, on the playlists and regularly being performed live in the UK and internationally. He has been stretching the boundaries of music since the start of his career in the early eighties. From a very early age however, Italian born Gaudi cultivated his obsession with music by constantly searching for and experimenting with new forms of sounds and grooves. A classically trained pianist with a fascination for anything that could produce sound distortion, his musical foundations were set in electronic and reggae music.


About Sea of Dreams: For the past 11 years, Sea of Dreams has been San Francisco’s most creative, spectacular, and lavish New Years event. Created by Anon Salon, and coproduced by Sunset Promotions and An-Ten-Nae Presents, this year's production will be the most spectacular rendition to date. Over the years, Anon has made Sea of Dreams the perfect connection of high-end talent, top-tier performance-art and decor with underground energy. Drawing much of its inspiration from the Burning Man community, the vast majority of the audience comes in costume and the entire venue is crammed with art of all kinds. Past acts that have performed the event include Thievery Corporation, String Cheese Incident, STS9, Ozomatli, the Yard Dogs Road Show, The Glitch Mob, The Dresden Dolls, Bassnectar, Ghostland Observatory, Kinky, Brazillian Girls, Adam Freeland, Tipper and Freq Nasty.

About The Organizers:  anon Events Inc  has been active in the Bay Area for  more than 20 years, conjuring productions that include music, fine art, politics and dance to unite the Bay Area’s conscious communities. Since 1998, Sunset Promotions (www.sunsetpromotions.net) has successfully produced over 1000 concerts & 20 music festivals including the beloved North Beach Jazz Fest (www.nbjazzfest.com) and SF Funk Festival (www.sffunk.com). For more than a decade, An-Ten-Nae presents (www.an-ten-nae.net) has produced some of the Bay Area’s most cutting edge music events.