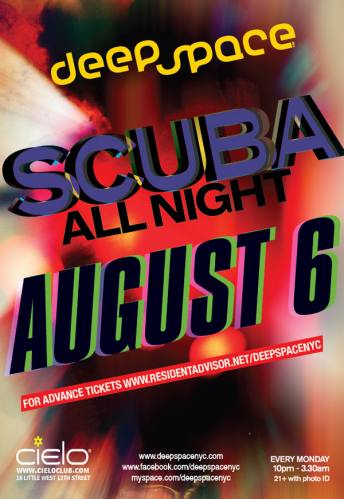 Scuba is the production and DJ alias of Paul Rose, the curator of one of the original dubstep labels, Hotflush Recordings, which released some of the most important tracks of the genre’s formative period and has grown into a leading player in the wider world of electronic music. A celebrated and influential DJ, he was voted #25 in Resident Advisor’s 2011 poll of the world’s Top 100 DJs.

Originally from London, Scuba relocated to Berlin in 2007, a move which (according to some) influenced his critically acclaimed debut album, A Mutual Antipathy (2008). The stylistic synergy of the album cemented his position as one of the most forward-thinking dubstep producers. The project was subsequently completed with a series of remixes by Surgeon, Substance, Jamie Vex’d, Martyn, Marcel Dettmann and the artist himself under his SCB guise.

between Washington St. and 9th Ave

Free admission and complimentary vodka cocktails before 11pm with eflyer