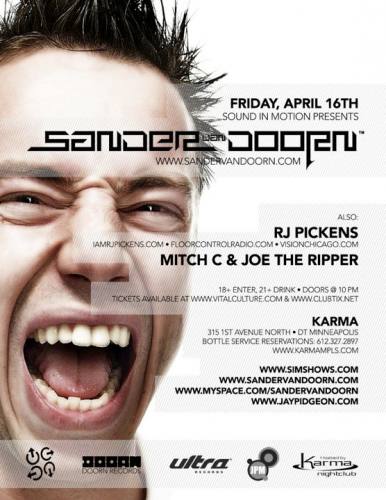 Join us as we welcome Sander for his long-awaited debut in Minneapolis!
Friday, April 16th
Sound In Motion presents
SANDER VAN DOORN
www.sandervandoorn.com
First there were Heineken and Edam, then came Sander van Doorn. The Dutch musical genius may not be as mature as his predecessors but he’s certainly made as much of an impact in his comparatively short career, not only in The Netherlands but also across the world.
Having made his debut in the world renowned DJ Mag Top 100 at 32 in 2006, before climbing 19 places to No.13 in 2008’s poll; sandwiched between Carl Cox and Paul Oakenfold, the fast rise of Sander van Doorn is a testament to his raw talent and dedication. In just seven years he’s clocked up more dance floor destroyers, sell out gigs and awards than most artists do in a lifetime… and his journey is still in its infancy.
From the start Sander (and his alter egos; Sam Sharp, Purple Haze, Filterfunk & Sandler) has produced a variety of sounds at a level that only most producers can dream of, combining elements of trance, electro, techno and house constantly blowing away his fans and comrades, keeping everyone guessing what he’s going to come up with next. His debut artist album ‘Supernaturalistic’ was released in 2008 to rave reviews and launched a 32 date global album tour. He followed this by winning the coveted prize of ‘Best Breakthrough Artist’ at WMC’s IDMA, where he also received a nomination for ‘Best Underground Track’ with ‘Riff’.
It’s not only Sander’s solo productions that keep everyone on their toes but his bootlegs, covers and incredible remixes. This year we have seen Sander deliver official interpretations for multi-million selling and multi-award winning band, The Killers, with his re-working of their single ‘Spaceman’, as well as ‘Peace’, the new single from electronic legends Depeche Mode.
Also let’s not forget his fantastic selection of collaborations, with artists including friend and mentor Marco V on the monster tracks ‘Organic’ and ‘What Say’, and ‘Close My Eyes’, the European Top 20 hit, with a man that needs no introduction, Robbie Williams. Sander is one of the most in-demand genre crossing producers of his generation, his releases regularly picking up support from as wide reaching places as Pete Tong, Judge Jules, Tiesto and Carl Cox – you’re as likely to find his records in a house DJ’s box as a trance DJs.
Not content with taking the world by storm with his productions, Sander’s DJ skills are a force to be reckoned with. Every year sees Sander playing to over one million clubbers. He consistently headlines huge events from Sensation to Global Gathering, from Trance Energy and Mysteryland through to his high profile summer residency at Cream in Ibiza.
It was Sander’s DJing experiences around the world that prompted him to start up ‘Dusk Till Doorn’, taking clubbing to the next level, offering the ultimate Sander van Doorn experience.. Having already wowed crowds at the launch in May at The Gallery, Ministry of Sound, London and in Ibiza in June, Sander’s musical and visual journey continues to pleasure crowds around the globe.
Sander is extremely grateful to his fans and likes to give back as much possible. In 2006 Sander set up his own radio show, giving fans the opportunity to hear him no matter where they might be. Now in it’s 3rd year and broadcast on DI.FM and syncidacted globally, the show has given Sander a platform to distribute the sound thousands of fans adore and a stage to test his own productions. In 2009 Sander relaunched www.sandervandoorn.com offering users the chance to view his Studio Sessions videos, learning the tricks of his trade, as well as being able to listen to his entire discography. The updated site includes the SvD forum, SvD shop, guestbook, his monthly hour long DJ mix and an exclusive members section which offers exclusive bonus content.
With all the above happening at such an early stage for Sander, it’s easy to see where this man’s career is heading – No.1
Website: http://www.sandervandoorn.com
Myspace: http://www.myspace.com/sandervandoorn
Dusk Till Doorn: http://www.dusktilldoorn.com
You Tube: http://www.youtube.com/sandervandoorntv
Facebook Group: http://www.facebook.com/group.php?gid=11087682391
Facebook Fan Page: http://www.facebook.com/pages/Sander-van-Doorn/42400315644?ref=ts
Bebo: http://www.bebo.com/SanderVanDoorn
Plus:
RJ Pickens [iamrjpickens.com] [floorcontrolradio.com] [visionchicago.com]
Mitch C & Joe the Ripper
18+ enter, 21+ drink
Doors @ 10 PM
Tickets available at www.vitalculture.com & www.clubtix.net
Karma
www.karmampls.com
315 1st Avenue North
Minneapolis
Bottle service reservations: 612.327.2897
www.simshows.com