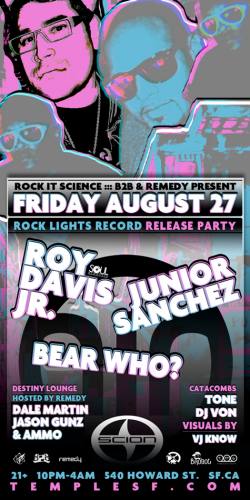 Scion teams up with Temple Fridays presented by Rock It Science to bring together a whole that is much greater than the sum of its parts. To celebrate the release of Roy Davis Jr's "Rock Lights" featuring classic hip-house vocalist Bear Who? we are not only bringing both original artists out to perform their single live but we are also adding standout remixer Junior Sanchez for his first San Francisco appearance in over 2 years! Please join us for an evening of nothing but headliners in the Main Room along with Remedy hosting the Destiny Lounge and Tone & Von in the Catacombs.


RSVP to eric@rockitscienceSF.com for free admission before 12, $10 after.


Roy's discography and DJ schedule is simply ridiculous. His anthem Gabrielle is credited as the first garage track, not to mention a slew of other hits on labels like Strictly Rhythm, Large Music, and Nice and Smooth to name a few. A DJ Set from Roy is always full of surprises, including classics that you had almost forgotten and the most cutting edge tracks that are yet to be released. We are very excited to host the release party for his new single "Rock Lights" available now on the Scion A/V label.


A union of mind and body characterizes Junior Sanchez’s attitude toward the sound he creates and the results he seeks. “Music should make you move and at the same time make you think,” he declares. Precocious beyond his years, his constant desire to reinvent his sound has earned him respect worldwide as one of the most innovative young DJ/producer/remixer's today.


Bear Who? a.k.a. Fuzzy Cufflinxxx -The self styled "Electronik B-Boy" - has been rocking dance floors across the globe. As a dj, he plays to the biggest international crowds. As an artist (and a top 10 pop single to his credit) Bear brings the energy like no one else can. His weapon is his ability to fuse House, Hip Hop & Electronic music on the mic and the turntables. With huge hits such as "Fix My Sink" and "The Beat Box" behind him, Bear surely has a bright future ahead. 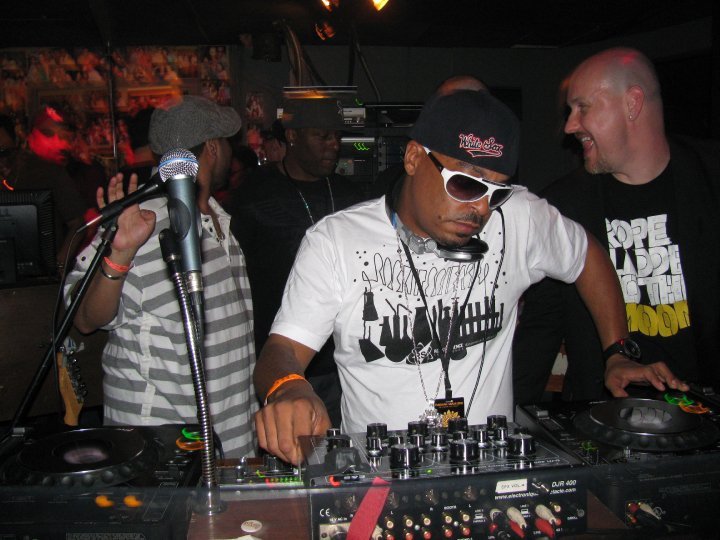