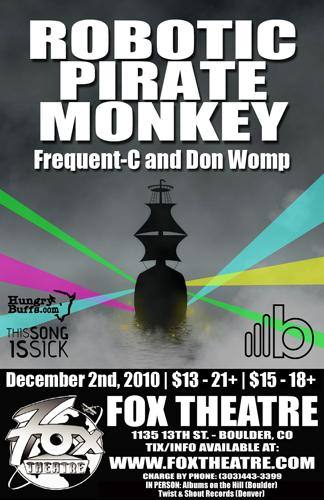 Robotic Pirate Monkey is an electronic group out of Boulder, CO. RPM is the collaboration of Andrew Hathaway, Matthew Berryhill, and Matt Flesher. After pursuing their own individual ventures for the past few years, RPM realized their collective potential in the spring of 2010 and have been producing electronic music since. Their high energy production overcomes the boundaries of traditional music genres. Drawing on aspects of Glitch, Dub, and Electro, RPM brings a new sound that is sure to make the crowd go nuts!

Frequent-C aka Cody Yozipovic is a multi-instrumentalist and songwriter. With heavy influences in jazz, hip-hop, and dub while incorporating live guitar, keyboards, and beat production in a live setting, the music that resonates is an evolving collective of musical genres that makes each live performance unique. Cody has shared the stage with artists such as Rusko, Major Lazer, Two Fresh, and Thievery Corporation.

Don Womp, also known as Elliott Donovan, is an up-and-coming DJ from Cincinnati, Ohio, and has been performing in Boulder, Ft. Collins and Denver for the past three years. He utilizes a heavy bass sound that ties together a wide variety of genres, including Dub, glitch-hop and funk. Don Womp's keen sense of song exhibits a versatile show in multiple gears. His performance has been described as "a funky ride in cruise control" that can also provide fans with the grinding, industrial climaxes we all love, screaming like a muscle car in 5th. He promises to make everyone move.