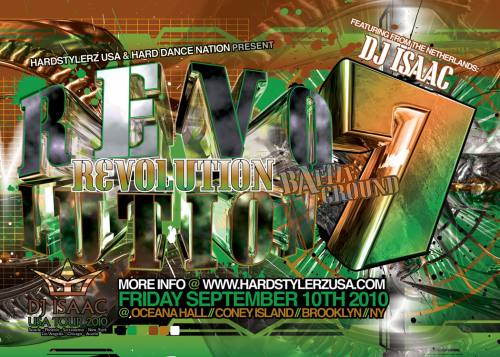 Be Part of The Biggest Hard Dance Event in NYC !!!!

From The Netherlands, The Return Of The Global Hardstyle Legend:

DJ Isaac has been at the forefront of hard dance music for over 15 years. He is always creating new revolutions in sound and is considered to be one of the founders of hardstyle music. His extensive background and his continuing efforts in the studio make him a regular headliner at the world’s biggest dance festivals and events. Behind the decks, he is very well-known for his outstanding and unmatched mixing/scratching skills. He is responsible for hit studio productions like 'Face Down, Ass Up', 'On The Edge' (the very first global hardstyle hit), 'Go Insane', 'Impressed', 'The Sound Of The Underground', "Tear The Club Up", "Bitches", and countless bootlegs. He has collaborated with Zany, Showtek, Technoboy, Wildstylez and D-Block & S-Te-Fan.

Ever since the early 90’s, DJ Delirium has been a forefront leader in the Hardcore Techno scene.  He has appeared countless times at some of the worlds largest events like Thunderdome, Mysteryland, In Qontrol, Raving Nightmare, Earthquake and many more.  Delirium has also had tracks featured on some of the worlds most legendary hardcore compilations CD’s including Thunderdome, Always Hardcore, Masters Of Hardcore and Resident E.

To date, DJ Delirium has released over 350 slammin’ tracks with some of Hardcores most recognized companies including ID&T, Industrial Strength, Traxtorm, Masters of Hardcore, MegaRave, and many more.  DJ Delirium’s got studio skills and has proven that with his top quality productions.

Anyone who’s ever seen DJ Delirium perform knows about his smooth mixing and tight scratching.  His DJ skills have taken him all over the world including countries like Holland, Germany, Italy, Belgium, England, Hungary, Canada, Spain and many more places over the years.  He has rocked dance floors for crowds of over 30,000 people!

DJ Delirium has brought the hits from the studio to the dance floor for the past 18 years, and there is no sign of stopping him so be prepared for the mantis to strike again!!!  = )

Battle Ground Sets with 8 Decks and 3 Mixers so get ready for a HardStylerz DJ battle like never before!!!!

DJ DREI aka The Digital Pimp

The founder of HardStylerz U.S.A. Drei has been a supporter of the underground scene for over 16 years! Drei is dedicated to the Hard Dance scene and he is driven to make the difference. His passion for the Harder Styles of electronic dance music started with a Hardcore mix tape back in 1994 and it changed his life forever. Inspired by legendary producers/DJ's like Frankie Bones, Lenny Dee, Paul Elstak, and Neophyte, it was only a matter of time before Drei would make his own mark as a DJ, promoter, and producer.

Driven as a fan, Drei started to DJ mostly for personal entertainment and for private events all over the northeast. Pushing the limits for over 15 years, Drei’s flawless mixing/cutting skills behind the decks represents a true veteran status that very few in the industry can match. Drei’s unique energy creates an incredible vibe that radiates to everyone on the dance floor. Drei had shared the stage with some of the biggest names in the Hard Dance scene including Headhunterz, Showtek, DJ Isaac, Dutch Master, Delirium, Used & Abused, DJ Venom, Hard ‘Onez, Jen Mas, How Hard, and all The HardStylerz just to name a few from the long list of talented artists ;)

Working hard as the front man of HardStylerz U.S.A. since late 2008 the crew has quickly become the premier Hard Dance organization in NYC. HardStylerz U.S.A. has been gaining recognition all over the World. Many top artists have been reaching out showing major support and Drei believes this is only the beginning of the future of Hard Dance music in the USA. Driven to bring back that old school vibe he fell in love with back in the 90's, Drei has definitely started a new underground Revolution! Are you ready to join the Revolution?

Last but not least Drei aka “The Digital Pimp” has also been working in the studio every free second he has. Drei has dedicated his life to music and it shows trough his hard work. In later 2009 Drei has formed the very first US Hardstyle label Empire Traxx along with business partner and talent manager Sogma. Empire Traxx has been gaining major support in the digital realm on JunoDownload.com and Hardstyle.com more info available on the web sites.

You must be wondering how is it possible for one man to accomplish all this with a new crew in such a short period of time? May people have been asked Drei the same thing and his reply “very little sleep :) and the best people and crew in the industry supporting me.”  Thanks

Djing since 2004 DJ Gomer has become well known for his fresh track selection of Nu-style while maintaining the classic Hardstyle sound. His sets are non-stop energy and his mixing skills come from years of non-stop practice! Rocking the east coast dance floor is his motive, and you won’t stop moving until the music does. Gomer is the leading innovator of the Upstate New York Hardstyle scene. Now teamed up and in collaboration with Hardstylerz USA, Gomer and this team of hardheads are taking the country by storm! After this Hardbass Instructa is done with his lesson, one things for sure, the dance floor will never be the same again.

Teddy Glow is one of the youngest and also most passionate HardStylez in our crew. He has been involved in the scene for the past 5 years pushing the Hardstyle sounds all over NYC, Philly, and Baltimore. His goal is to tour the country and introduce his sound to a wider and wilder audience, not only as a DJ, but also a producer. Teddy Glow plays straight from the heart and that heart screams, "Long Live Hardstyle!"

SOGMA - whose name stands for "State Of Great Mental Abstraction" – is a cutting edge Hardstyle DJ & Producer. After more than 14 years of DJing and 7 years of producing, SOGMA has become a key figure in the American Hardstyle scene. He quickly gained notoriety across the U.S. and overseas. He is the Founder and Executive Producer various highly praised projects - the internet radio showcase "The Hard Axis Show" and a YouTube series called "Hardstyle Live", which earned him a spot on the November 2009 issue of DJ MAG. SOGMA is currently signed to Empire Traxx, a innovative Hardstyle label based in NYC under the parent company HardStylerz USA. Born in the Dominican Republic, SOGMA currently lives in the NYC area.

Schoty is a long-time lover of Electronic Hard Dance Music. Inspired by the Dutch style, he began performing professionally in 2007. Since then, he has had the privilege of sharing the stage with legendary DJs such as Isaac and Headhunterz. Schoty’s mission is to bring the best Hard Dance Music to the USA. He is devoted to creating Hard Dance Parties featuring the best Hardstyle DJs Europe has to offer. With the support of HardStylerz USA and Hard Dance Nation, Schoty will continue to tear up stages with his endless energy, explosive sets and intense passion for hard pounding bass. He has traveled to Holland and seen how powerful Hard Dance Music can be. Now, he is determined to bring that same magic to America!

CiM . He began his Dj career in 2003 with two turntables and a two channel mixer. Not wasting any time CiM got right into the scene of different styles of EDM. It wasn’t till late 2004 where he came across the Hard Dance scene. This was the beginning of something that would lead up until now. A few artists that have had a huge influence are: Zany, Headhunterz, Tatanka, Isaac, Technoboy, The Prophet, Noisecontrollers, and Brennan Heart. In the Present time CiM is part of C.A.O.S. (Creative Axis of Sound) a hardstyle group that including Dj CiM, Dj Sogma, and Ryan Blatt. CiM is also a part of the board of members of HardstylerzUSA a group formed by Dj Drei. Which looks to establish the harder dance scene in the U.S. Currently, working in the studio on his own Hardstyle productions and different mixes. CiM is the youngest among the many talented within HSUSA. Doing things different is what it is all about. Not following the trend of everyone else but being creative and having a sense of an imagination and passion. His style is straight to your face, in other words “HARDSTYLE”

Born and raised in Philadelphia and now hailing in NYC, DreamMaster is a veteran Trance DJ who started his career in 1997. His signature style of hard anthem trance has rocked dance floors up and down the east coast, including official WMC events in Miami. In 2005 he completed a degree in Audio/Recording engineering at the Institute of Audio Research in Manhattan. From post-production sound design to studio builds for the legendary Erick Morillo, DreamMaster is always keeping busy. His Passion for music is unsurpassed and it truly shows in his DJ sets and productions. Free mixes are available at DJDreamMaster.podomatic.com and WaxDJ.com original tracks are available at MySpace.com/DreamMaster and also coming soon to iTunes.

Joe has played at some of the top venues and events in the world, including the several gigs at the Guvernment (Voted #8 Nightclub in the world), Circa (Voted 2007 #1 New Nightclub in the World), Trinity Rooms (#1 Nightclub in Ireland 3 years running), Revolution in New York City, the World Electronic Music Festival and even the Grand Oasis in Punta Cana, Dominican Republic to name a few!

Recently signed to Great Britain Hardstyle Records, Joe's first release alongside Khalid S was picked up by a second label and is now featured on The Best of Hardstyle & Jumpstyle Vol. 2 by Trance Gold Records!  Known for his tight mixing skills and energy behind the decks, this 2 time DJ comp winner has been rocking dance floors for years with a career spanning nearly 200 gigs and counting!

In addition to adhering to his busy DJ schedule, Joe has also organized nearly 50 EDM events! From his Christmas food drive to Recognition to his flagship event, Deep Frequency Fridays, Joe's events are well received and showcase a variety of DJ & Producer talent from around the world in a great party atmosphere alongside upcoming local artists!

With a diverse vinyl & digital music collection, and his own productions under his belt, Joe is known as a very diverse DJ, with a passion for everything from House, Electro & Prog, to Hardstyle, Trance & Techno.

This is the Aftermovie from our last party Revolution 3: Exclusive w/ DJ ISAAC

By Subway: Q and B to Brighton Beach Avenue

No dress code: free to be yourself

Lasers, Hot dancers, Great vibe, High energy, and another event you will never forget!!!! Free CD giveaways all night!!! (Get there early)

General admission tickets may be purchased at the door for $25.

We support the troops and fallen heroes.

We will be donating a percentage of the profits to one of the 9/11 funds so come out and show your support!!!!!!!

THIS JUST IN: VITARDED! Will Be The Official Afterhours for REVOLUTION 7: Battle Ground! Hardmind and Vitus are proud supporters of HardStylerz USA and their contributions to the New York City rave scene and beyond.