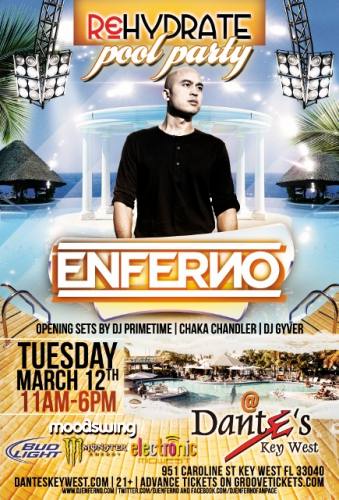 For the first time ever, The famous Rehydrate Pool Party Series is heading to Key West in March for a special Spring Break Edition. On Tuesday, March 12th, the one and only Enferno will be headlining. Additional DJ sets by DJ Primetime, Chaka Chandler and Gyver. Dante's will be serving as the host of Rehydrate on March 5, 12, and 18.

ENferno:
As a kid, ENFERИO spliced together tracks from his favorite cassette tapes to create seamless mix tapes. Soon after getting his first DJ setup, ENFERИO (also a trained pianist) practiced for hours a day, and played local parties. After graduating college, ENFERИO saw a tape of the DMC DJ competitions, and was hooked. A few years later, he won the DMC USA Championship (2nd in the Worlds), and made music his career. In 2006, ENFERИO created the next progression in live DJ performance: the Live Remix Project (LRP). Through the LRP, ENFERИO becomes a one‐man band, playing and sampling synths, drum controllers and turntables to create live music. ENFERИO's LRP got him noticed by Madonna, who invited him to be her DJ on the 2008‐2009 Sticky & Sweet world tour. While on the tour, ENFERИO also helped create and program musical arrangements for the show. Today, ENFERИO balances studio work with jetset life as he travels the world weekly for his own tours.

For advance tickets go to flavorus.com/enferno