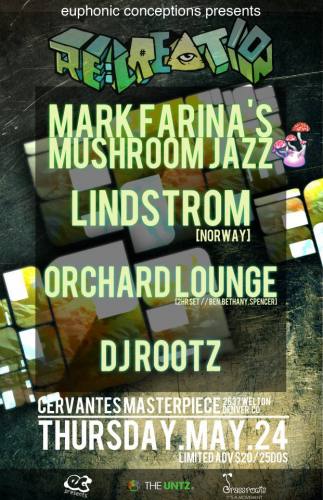 Shortly after Mark Farina befriended Derrick Carter in 1988 at a record store in Chicago, his passion for House music, and sharing it with the world, exploded. Mark experimented with a deeper style, dropping De La Soul, disco classics and other stuff that wasn’t being played in the main rooms of nightclubs. While exploring his love for the purist forms of House Music, Mark developed his trademark style: Mushroom Jazz; acid jazz infused with the West Coast’s jazzy, organic productions along with urban beats.

Fans embraced Mark’s downtempo style so much that he started a weekly Mushroom Jazz club night in San Francisco with Patty Ryan. In 3 short years, the club established a fanatical, cult-like following for Farina and the Mushroom Jazz sound. When the doors closed, Farina continued the tradition by releasing a series of Cds, “Mushroom Jazz”.

Since then, Mark has been traveling the globe performing 1000s of shows, to over one million club goers, a year. His House sets take fans on journeys to the jazzy side of Chicago House mixed San Fran style. Some of these sets have been known to last up to 8 hours. And sometimes you’ll find Mark playing in two different rooms at the same party, showcasing his range of rocking the big room sound to the uber-chill.

Farina’s taste making skills continue to turn the heads of crowds worldwide and consistently draw new fans to his style of chunky–funky rhythms and deep underground house. URB, MUZIK and BPM Magazines have all had him on their Top DJ’s In The World lists.

Christabelle Sandoo is a nomad diva who landed in the Oslo studio of Hans-Peter Lindstrom, the electronic producer whose 28-minute 2008 "Where You Go I Go Too" posited a new genre: epic prog-house. They're a perfect pair. Christabelle maximizes her limited instrument throughout, speaking with moist vowels between sung verses like Grace Jones in a training corset. Lindstrom's tracks shine like sun on snow, disco struts alternating with electro-funk chugs. Defining moment: a techno-fied cover of "Let It Happen" by Vangelis, another visionary European who never let genre considerations get in the way of a tasty overproduction.

Orchard Lounge is a collective of DJs and close friends that formed in Chicago in 2000. The trio of Ben Silver, Spencer Lokken, and Bethany Lokken, focus on performing for the more discerning of dance floors, and are known to appeal to open-minded and diverse audiences.

They’ve never let their passion for the beat confine them to a single genre, as their sets may include anything from laid back downtempo/IDM to hypnotic tech house and b-boy era electro. Don’t be surprised if you hear an entire night of music dedicated to the sounds that have heavily influenced them as DJs either: they all share an affinity for classic hip hop, rock, funk, and soul, as well.

This is the reasoning behind “OL: From the Dance Floor to the Couch”. It’s the appropriate defining phrase for the group because of their innate programming and record selection skills, as well as their talents in creating an experience for most any state of mind or environment. Some may label this as being versatile, however the three simply consider themselves serious music lovers with similar, albeit eclectic, interests.


At the very core, they’re highly enthusiastic individuals full of praise for the producers whose names appear on their records. To that end, they’ve always fully understood their role as middlemen (and woman!), and if they are to accept the coveted role of tastemaker, they want it to soley benefit the artists whom they all admire.