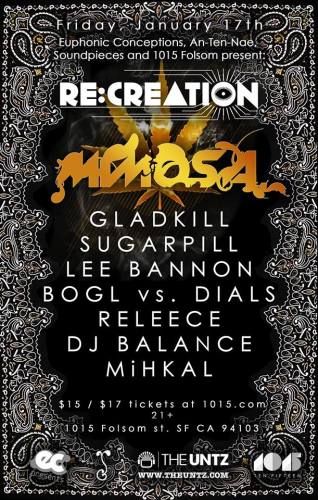 
Blending sultry melodies with booming basslines, MiM0SA offers up an interesting and soulful take on the sounds of hip hop beats and dubstep.


The Los Angeles-based artist started his own label False Idol Music in 2011 as a means of distinguishing his sound from other electronic artists and building a repertoire of releases. His latest release, “Future Trill vol. 1”, is currently available for free mp3 streaming and download on his official site, mimosa.fm.


MiM0SA’s continuing Future Trill tour has brought him to cities and festivals across the country, playing to thousands of fans at Bonnaroo, Ultra, Outside Lands, Wakarusa, Starscape, Electric Forest, amongst many others. His live performances have caught the attention of Spin, who named him as one of the "Top 10 Acts at Bonnaroo" of 2012.


With his huge summer festival performances including Coachella, Beale Street, Electric Daisy, Noisy Neighbors (UK), and Global Dance Fest at Red Rocks, MiM0SA has been one of 2013's hottest DJs.