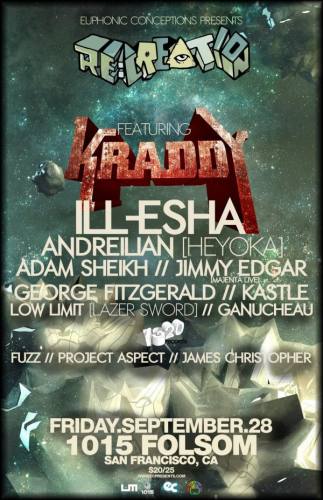 
Known as a pioneer of electronic music, Matthew Kratz aka Kraddy is one of the most innovative and remarkable artists of his day. He stands as a visionary in his field, a fresh voice that spans genres and artistic style. Hybridizing hip hop, dubstep and dancehall with digital edits and cuts, Kraddy’s music is a voice from the future awakening our ears and minds to what is yet to come.


Originally from NY, Kraddy began his musical career in San Francisco releasing his debut album, Truth Has No Path, in 2003. With the release of the single “Faux Show” Kraddy became an underground favorite in the electronic music world. After a handful of vinyl breakbeat releases, Kraddy changed the game once again with his sophomore effort, The Illegal Album. Fueled by fierce beats and searing edits, The Illegal Album was a radical fusion of Kraddy’s unique production chops with classic hip hop and dancehall acapellas. It was hailed as a breakthrough and soon after led to his collaboration with the Glitch Mob.


After several more well-received releases with the Glitch Mob, Kraddy struck off on his own to pursue his solo career as a producer and performer where he continues to tour worldwide with his futuristic fission of dubstep, hip hop and dancehall.


Far far away in deep auditory space, Heyoka has been abducted, cosmically mind probed, upgraded and reconfigured in an extra terestrial lab on a planet known as Marklar. Fortunately he has returned almost entirely unharmed, and now shall be known as the artist currently know as Andreilien….


Andrei Olenev first emerged as HEYOKA on the San Francisco underground glitch/bass scene in 2006. By 2009 he was touring extensively and quickly became a staple sound in the rapidly growing bass music scene of North America. With a constantly evolving, original style, he stood out amongst bass music producers as one who keeps the vibe going strong while venturing to explore new realms of sonic experience. Playing always live sets of his own original tracks, his music has been described as a journey through fractal soundscapes and alternate realms while riding the waves of fat glitch beats and earth rumbling sub bass.


For over a decade, ill-esha has been an integral part of the North American electronic scene. Beginning as a vocalist, she soon added MCing and DJing to her repertoire, creating a dynamic and unique live show which has headlined alongside artists such as Andy C, Klute, Dieselboy, Vibesquad, LTJ Bukem, Tipper, T-Power & De La Soul. She has performed across North America, Europe and Asia; in clubs, at festivals, and even on TV shows on MTV Canada and the CBC.