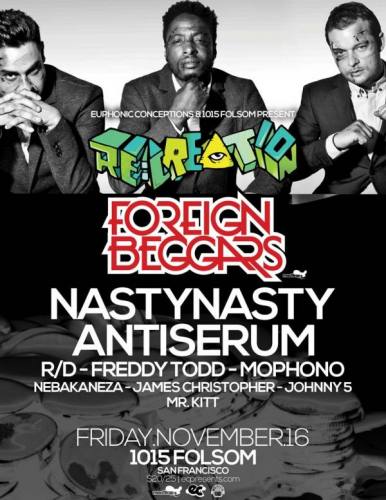 
The Badman Riddim (Jump) Songfacts reports that Orifice Vulgatron and Dag Nabbit met in Dubai and after making drum and bass for a time they switched to hip hop. DJ Nonames met Metropolis at university in 2000 and the duo joined hip hop and funk band Focused Few and began throwing warehouse parties and touring. Vulgatron was introduced to Nonames through Dj Gizroc, then part of the Mixologists Crew, and by late 2002 the quartet had started performing and recording alongside beatboxer Shlomo. The band released their first album, Asylum Speakers on November 27, 2003. Shlomo subsequently moved on and started doing his own thing with the Beatbox Orchestra and by 2011 Dagnabbit had taken a backseat and was concentrating on the crew’s business side.


The crew have released a slew of 12”s and Ep’s and really made their mark after independently releasing their critically acclaimed, debut LP ‘Asylum Speakers’. Foreign Beggars have collaborated and toured with the cream of UK’s hip hop movement, with Shlohmo, appearing on Björk’s album Medulla and, NoNames having done cuts for Damon Albarn’s Gorillaz project. With forthcoming projects with Dj Sparo, DJ Vadim, Dudley Perkins, Wildchild (Lootpack), Oh No, Dj IQ, Dj Mentat, Scratch Perverts, and Euphrates, the crew see no boundaries with diversifying their sound.

Since the release of his debut single “The Reef” on Frite Nite he has been pulling down remixes, working on vinyl releases and performing mindbending sets across the nation. Seemingly erupting from nowhere this Oakland based artist has been melting both faces and hearts with his own brand of bass music, frequently combining filthy bass sounds with focused melodies and sentimental vocal snippets into a melange of sonic wonder.


Pulling influences from both club culture and counter culture NastyNasty’s unique sound has garnered attention around the globe gracing blogs and mixes worldwide, most notably; 2 top rated mp3's on Xlr8r, a rinsing on Skream’s “Stella Sessions” radio show by dj/producer Starkey and his own mix on Rob Booth’s (formery of BBC1's “BreezeBlock” with Mary Anne Hobbs) “Electronic Explorations” podcast series.