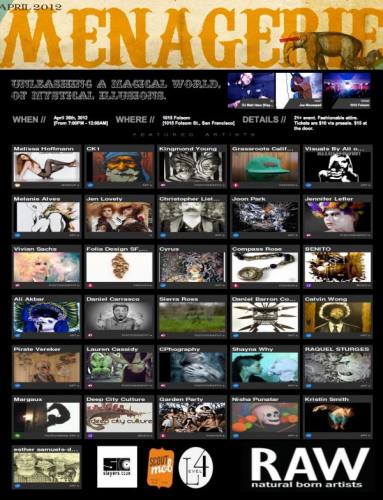 
RAW SF, known for throwing the Bay Area's largest fashion + music + art monthly every 4th Thursday, will be transforming 1015 Folsom and unleashing a magical world of mystical illusions like never before on THURSDAY APRIL 26th!


take a peak inside the mysterious Menagerie playground here.


With over 600 attendees each month and 30+ of the Bay's emerging & legendary underground artists all coming together to cause a boundary pushing event of unparalleled proportions... RAW SF is not to be missed!


"Raw SF's made quite the name for itself as a monthly that showcases the latest in independent and underground artistic talent. Whether it's showcasing the hottest looks, bassiest beats or sickest art, this collective is definitely driven by natural ability." -nitevibe.com


(n.) menagerie: a place where a collection of wild or unusual animals are kept or exhibited.


'MENAGERIE' will feature art, music + fashion beyond your wildest dreams and guide you through a wonderful dimension of lucid illusions and creative bliss.


BENITO, currently a staple in the Bay electronic music scene and beyond, is known for making frenetic music full of rapid fire percussion and ever changing rhythms and textures. Benito (Brian McNally) is a prolific producer of quality knock, forward thinking and bass-heavy tracks.


Deep City Culture is the new brainchild of Auganism (Sumner St.Clair), OrkidZ (Issam Jadrane), and My Pet Monster (Ryan Summers), a musical and artistic experiment that combines the guys' 30+ years of music making experience with a desire to push things forward (and outward). The result has been an eclectic range of sounds influenced by their broad (only occasionally overlapping) taste in music, forged into a common vision of a diverse and challenging musical experience. Oh, and you can dance to it. Look for their debut compilation, Deep City Culture Vol. 1, coming soon to deepcityculture.com.


Slayers Club, known for throwin' & rockin' some of the Bay Area's biggest and baddest parties, is a collective of DJs, producers, MCs, visual artists, designers, and other creatives. Devoted to the exploration and advancement of dropped riddims with maximum defness and with roots in bass music, Slayers Club is a family, a force, a movement.


((( A whimsical circus of everlasting delights )))


with makeup by *Melissa Hoffman*


and don't be surprised if you think you catch glimpses of a rowdy lil runaway troupe... we've heard they may make a special appearance... with everything from mimes to stilt walkers to animals from another land.


OUT OF THIS WORLD VISUALS BY THE INFAMOUS IMAGERY KING


and no Bay Area show would be complete without the


crew on hand to keep the party going and those dope hats of theirs flowin'. Make sure to pop by the GRC booth to grab the latest, limited edition lids that just dropped before they're all gone!


ALL RAW SAN FRANCISCO MONTHLIES ARE PROUDLY SUPPORTED BY


$10 pre-sales available online only, until we run out:


(INCLUDES ALL THE INSANE ART, MUSIC & FASHION YOU CAN HANDLE! PLUS AFTERPARTY ENTRANCE)