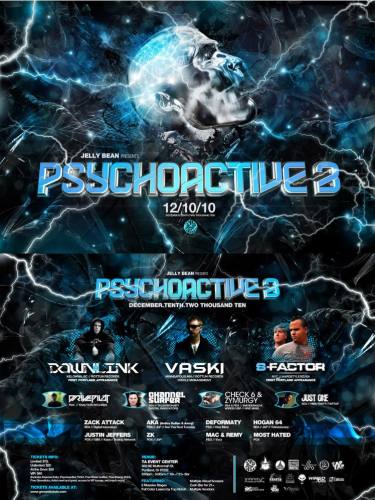 25 year-old Downlink has been punishing dancefloors all over the planet with his heavy brand of dubstep. With roots in Jungle & DnB, he is no stranger to the vile side of subsonic dance music. Growing up in a cold industrial town in British Columbia, Canada, he was first introduced to dubstep in 2007 and soon after took to production. While maintaining an appreciation for sparse and laid-back dubstep, Downlink set out to explore a more frantic, adrenaline fuelled style, influenced by everything from heavy metal to astrophysics. His first two releases charted at #1 on several popular online distributors and soon he found his way onto Rottun Recordings which seemed a suiting place for his music. With the release of his "Ignition EP" he has gained DJ support from the likes of Excision, Datsik, Stenchman, Borgore, DZ, 16 Bit, Dieselboy, Evol Intent, Crookers and many more. Downlink is not one to be pigeon-holed and is constantly on a quest to evolve and refine his sound. With this in mind, one thing will always remain constant - a pure unadulterated heavy listening experience… When DJ/Producer Vaski sent his demo to rottun manager Excision, he had no idea of the journey that he was beginning. With his first two tracks storming the beatport top ten charts, Vaski hit the studio, returning to his Electro House production roots for the massive Terror Dome EP, featuring the self-titled track as well as the hit single "You Wouldn't Understand," Peaking again in the top ten of dubstep on beatport. Vaski's productions and local DJ sets began to gain attention of international promoters and DJ'st. Vaski spent the next season DJing at many Twin Cities venues, playing at the famed First Ave, Dinkytowner, and The Loft all the while working on his next work. World on Fire EP shook not only the beatport charts but the entire dubstep community. All five tracks peaked in the top 25 in dubstep on beatport, two tracks in the top ten, and the famous "Get Down" claiming its rightful place as a number one hit. This massive release rocketed Vaski to where he is today: smashing through his international tour, gaining rapid popularity for his unconventional stage presence, and continuously producing ridiculous and catchy bass lines. On the horizon for Vaski is the continuation of his tour, and his biggest production to date. Sogma and Schoty, two powerhouses in the East Coast hard dance scene, have joined forces to create S-Factor. As solo artists, for over 15 years combined they have rocked the United States with their unique blend of hard dance music. When Sogma and Schoty first performed together in 2010 it became clear that their on stage chemistry was something very special as they left the crowd wanting more. Now, they have decided to produce and perform together. Their different styles create a unique sound and performance that they are ready to share with the world.

They are currently hard at work in the studio! More to come…so stay tuned!

With numerous U.S. Tours and countless national dates Channel Surfer is one of Seattle's most traveled DJs. His professionalism on and off the stage have helped him become a Seattle mainstay and gained him the respect of his peers.

This multi-facted musician has worked in film, television, and video games. Channel also works hard to develop younger DJ's and is known for training and supporting up and coming talent . In 2007, Channel started Televisionary Records to give producers in the area outlet for their productions.

Channel's lengthy discography continues to grow with releases on the biggest labels in dance including Armin's "Armada", Oakenfold's "Perfecto", Askew's "Discover", and Acosta's "Fektive". "I don't mind being called a DJ or a producer", Channel observes, "but I'd really just like to be thought of as a solo artist". Channel Surfer has been a top seller on both iTunes and Beatport and his 4th artist album entitled, "Life: The Sequel" is in full scale production. Drivepilot is the Electro project of 25 year old U.S.-based producer Nick Edwards, originally from Vancouver, Canada. Started in Nov 2009, Drivepilot built off his previous years of rock production, fusing his knowledge of this- with his love for hard electronic music- and immediately gained attention and support with his first original tracks and remixes.

His first 5-Song EP "Savages" was released July 1, 2010, on Traction Records- a Portland, US based label he co-founded also in late 2009. After the release of "Savages" , Drivepilot immediately went back to work harder than ever, churning out huge official remixes for electro favorites such as Haezer, Autodidakt, NEUS- and 2 back to massive remixes for Fuck Our Ordinary Lives (F.O.O.L).

Determined to top himself, Drivepilot brought out the big guns with "FUCK YEAH!", a massive single that destroys club floors and sees Drivepilot step it up yet again. Despite not being released yet, "FUCK YEAH!" is already racking up thousands of plays and support from DJ's and fellow electro artists across the globe including Cyberpunkers, who ranked it their #2 favorite track (09/2010). "FUCK YEAH!" will be released October 25, 2010 on Traction Records. Two of the greatest hardstyle DJ's in the NW come together for the first time! Just One first became interested in music at an early age, as he grew, so did his passion for listening to it. His interest in becoming a disc jockey was sparked back in 2000 after attending several large were house parties in Seattle. Now with over ten years experience behind the decks, he uses his eclectic taste in bass to deliver wide-ranging and rib-crushing sets. He comes prepared to punish you with an arsenal of dubstep, d&b, haftime d&b, glitch hop, electro, and bassline house that will give just about anyone a bass face. Proudly representing Harvard $t Mafia, Tap Tap, and the Shift dubstep crew! Just One is making an impact on the Pacific NW with no sign of slowing down!!