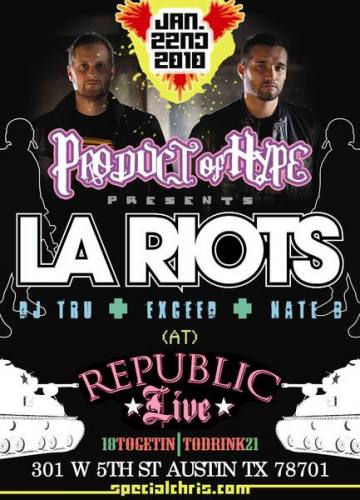 LA Riot's Bio:
LA Riots are in the business of crafting straight-up, hot-as-shit club bangers and they're not messing around. In only a few months since their inception the Los Angeles duo has made a name for themselves cranking out one quality track and remix after another and blowing up some of the hottest parties and venues in Southern California. Now, with remixes of Ocelot, The Scanners, and Le Castle Vania tearing across the blogosphere they're poised to take the party to the masses.
Keep your eyes and ears open boys and girls, this is going to be big.
-Urb Magazine
From flooding the Blogosphere to infiltrating LA’s hottest parties, LA Riots has taken all dance-hearty ears hostage. After just a few months, this power duo, Daniel Ledisko and Jo’B, have delivered thundering remixes that make the lo-tech kids cry with envy. With a knack for picking winning tracks to mash, their latest Justice remix (featuring Uffie), ‘The Party’ kills on the dance floor. And what God-fearing hipster could forget the remix of The Scanners’ ‘Low Life’? Next on the chopping block—The Cure’s ‘Just Like Heaven’ and Chromeo’s ‘Bonafied Lovin’. Now you know those ears are safe with these dudes. -SwerveFest
They are the best DJ's in L.A. and whenever we play with them, we know we really have to bring our best.. and not many DJ's make me nervous! -JFK of MSTRKRFT
Tattoo Rock Parlour launch Clash, their new electro and indie dance night, with appearances by hotly tipped California remix artists LA Riots and the Baltimore club sounds of Aaron LaCrate. LA Riots are on the verge of blowing up, so catch them now before they end up headlining the mega-clubs.
-Toronto Now