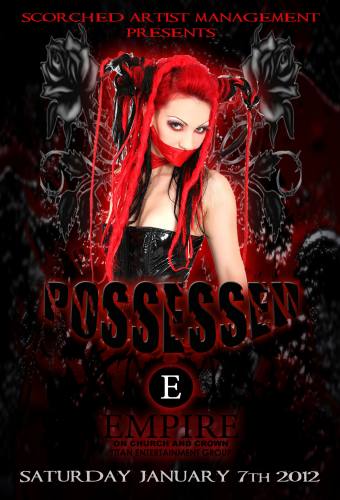 THIS LINEUP HAS SOME OF THE TOP NORTHEAST UNDERGROUND DANCE MUSIC VETERANS - IF YOU DONT KNOW WHO THESE MUTHAFUHKKAZ ARE YOU BETTER COME GET FAMILIAR OR STAY HOME AND WONDER WHY YOU ARE PART OF SOMETHING YOU KNOW NOTHING ABOUT!!!! THIS WILL BE AN ALL AGES EVENT!! SO NO MATTER WHAT YOUR AGE IS COME SEE HOW THE OLD SCHOOL BRINGS IT FOR THE NEW GENERATION!!!

One of New York City's Original Electro House DJ's, Havok has been rocking parties coast to coast for over a decade. His series of mix cd's have been widely acclaimed and have withstood the test of time. His debut track with Ralphie C "Engine #9" was dropped at many major festivals by headlining acts including "Ultra" and "Coachella". Stay tuned for upcoming productions and events.

DJ Dread has been behind the decks, rocking crowds for decades. One of the CT's top trance and techno DJ sharing the stage with some of the top DJs which include: Josh Wink, Dave Trance, James Christian, Bad Boy Bill, DJ Dan, Felix the Housecat, Omar Santana, Diselboy, and many many more... During the 90's he teamed up with Sans-one to form VR Production and help shape much of the Connecticut rave scene. By 2005 DJ Dread was traveling all around the globe bringing his unique sound to the masses... He is an exciting DJ that is sure to make you move, rocking his home state one more time! Don't miss this special Throwback Acid Techno set!!!

Rob has shared the decks with a long list of top influential DJs that include: Frankie Bones, Super DJ Dmitri, Derrick Carter, Dante, Mark Farina, Josh Wink, Dave Dresden, David Hollands and Donald Glaude just to name a few. He has played at some of the world’s most famous clubs such as the Limelight, Palladium, Tunnel, Shelter, Club USA/World, Club Vinyl, just to name a few. Rob Bamboo Cifre has held residencies in both Connecticut and New York. His unique blend of funky techy house has earned him a large, loyal fan base. Constantly striving to push the scene forward as well as leverage his many years of experience gained from in front and behind the scenes Rob started Agency Sounds in 2009. In Agency Sounds infancy its roster boasts some of the dopest names in EDM all due to Rob Bamboo Cifre’s integrity and the respect he has earned for his musical abilities.

With a career spanning two decades on the dancefloor and radio, James Fusion is someone who definitively knows what he likes about dance music.

Often imitated, never duplicated; James Fusion is the enduring sound of the underground,

DJ Shy is one of the old school original New England founding fathers of the electronic dance music scene. With over 30 massive events to Shy Productions credit, Shy Productions still a leading company in the sound and lighting industry. DJ Shy is also internationally known for his high energy sets and DJ skills, playing massives and residencies from New England to Seattle since 1987. He has taken under some of the Funky Tekno Tribe's roster, playing headlining alongside his mentors, Donald Glaude, DJ Dan, Terry Mullen to name a few. He plans on passing the torch to newbies and promises to play some tracks so old that your parents were trying to get to first base as freshmens! He is known for his high energy with a twist of unknown surprises through his sets. See what he has up his sleeve as he attempts to play his first set in ct in over 2 years with his recent vision loss.

The diva who dominates the decks like no other... Beginning her djing career in the mid nineties, she quickly took hold to the raw, gritty, aggressive sounds of pure techno. Peppered with occasional trance and old school favorites, she is able to win her audiences over with her unrelenting beats. Her 1st album-Dragonslayer on K:cid:X Tracks has sold out and is still being asked for!

Spinning since 1994 and co-founder of Swarm Records. Madame Buddafly will pepper techno sets with trance, house, and electro using costumes and props to excite the audience. She is known worldwide for her energetic sets. She has appeared in clubs like Tunnel and Sound Factory NYC, and at raves from Maine to Mexico, Germany, and beyond. Her mix Erogenous was chosen as a Love Parade.com DJ Mix of the Week. Her production skills are top notch. She is a fireball of flawless mixing, signature track selection, and grinding non-stop beats.

of Tech trance, armed to the teeth with fire for the dancefloor SE7EN

is sure to Light it up! Dont miss this rare opportunity to see him back

Real Hype’s Boss Man and New Englans Break Beat Pioneer, DJ Phunkae has been droppin funk on ya since 1996, his first label Funk Dawg Records had some major hits in the late 90′s and early 2000′s. Founding Real Hype in 2008 and crankin out a ton of chart topping originals and remixes, DJ Phunkae reinvented his funky style and is set for a big year in 2011. Look out for his full length album coming soon!

Originally behind the decks for Kingsize-USA as a breakbeat DJ, Sonic moved dance floors with a funky combination of breakbeats and 2-Step breaks. From raves to the old Wednesday night sets at Function in New Haven, and even rockin' thousands of bodies at A Tribe Called Quest's Farewell Tour at the Palladium, Sonic dedicated himself to spreading the underground sounds.

After moving on from Kingsize, Sonic retreated to his lab and began crafting original tracks. All along, the evolution of electro-house continued tempting Sonic's ears. Inspired by these big electro basslines and stomping beats, Sonic crafted his take on what he describes as "bangin' electro."

Fueled by his new take on sound, Sonic looks to continue moving crowds with his very own spin of party rocking beats. So come stomp your feet on the dance floor with DJ Sonic Bee soon... and bee on the lookout for the product of his time in the studio with original productions on their way!

A veteran of the hip hop scene. Grund has been annihilating the dance floor for the past 9 years. With the past 3 years going on 4 in the electronic scene Grund's high energy hard hitting electro, tech house/techno will get any dance floor moving. With support from Flock Productions, Vertical Music AZ, 3rd Planet Productions, Az shufflers movement & R.I.D FAM. Come support Grund on what he has a passion for most and what he does best and pack the dance floor for another full filled hard hitting different sound that the people love.

as a long time drum & bass soldier in new england, elzwerth has attacked any stage he's been placed on with the illest of todays bangers and the freshest of the old school that brought us here. however, over the past year a select few events have seen the other side of elz, the old school raver rat. tonight, he digs in the crates of yesteryear to bring you the classic hard house, hard trance and techno that initially pulled him into the scene.

Put simply, Boston native and techno guru, NDE shows up to do work.

Respect for the craft and knowledge of music, matched with

One of the original females of the Scorched Army comes

with a full artillery of Techno and Electro to destroy this

Connecticut dancefloor or as she would say "dance flooah"

get ready CT it's goin down!

The Acid techno OG of Scorched ready to level the place

with his onslaught of 303 bassline driven madness!

Tune in Turn on Get Tweaked!!!!

With his musical stylings and tastes reaching from the deepest, darkest, sexiest house beats to the most uplifting and energetic trance anthems both new and old, there is always something new and diverse to be offered in each of his performances. Being pigeonholed simply is not in the cards for this one. Every set with it's own unique twist that blends the enviornment, location, and audience into an attractive and memorable night for all. When not found spinning in the clubs, Skithiryx can also be found in front of his studio. Producing many acclaimed mixes for the masses one after another.

Smashing dancefloors up and down the east coast and abroad

Head General of the underground haven known as "THE CAVE"

Meanwhile back the lab... Chananagains was mixing up some hardcore beats. After 5 years of stomping dance floors this hardcore kid had a dream of rocking the stage. She got her start promoting and helping out behind the scenes. Soon after, she moved forward to deejaying local underground clubs playing everything from electro, breakz, fidget, dnb, and hardcore.

Chananagains has made a huge impact on the rave scene. Defender of P.L.U.R. and the ol'skool beliefs of R.A.V.E, Chananagains is the raver the party deserves with her amazing track selection and her unbeatable poi skills. Chananagains will always be an all around great performer.