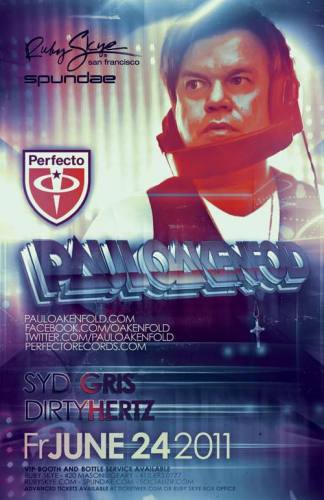 
Paul Oakenfold has been touted as one of the world’s leading DJ/remixers by various outlets including CNN, Rolling Stone, BPM, Remix and more.


In 2007 Paul Oakenfold released his Greatest Hits & Remixes through Perfecto/Ultra Records –a 20-selection strong collection of his seminal dance recordings and remixes. Its track listing ranges from original productions such as his massive singles “Starry Eyed Surprise” “Ready Steady Go,” and “Faster Kill Pussycat” featuring Brittany Murphy. In addition, there are remixes galore of artists like Justin Timberlake, U2, Madonna, The Smashing Pumpkins, Radiohead and Underworld and soundtrack pieces such as David Arnold’s James Bond Theme from the motion picture Die Another Day and Oakenfold’s “Dread Rock” from Matrix Reloaded.


His first album for Maverick Bunkka was released in 2002. It included Starry Eyed Surprise featuring Shifty Shellshock of Crazy Town, a Top 10 hit in both America and the U.K. Other guests on the album were Perry Farrell, Nelly Furtado, Ice Cube, Tricky and Hunter S. Thompson (his last recording before he passed away).


Paul Oakenfold’s 2004 mix album Another World has reached gold status in sales making it one of the biggest selling dance albums of all time. In total his releases have sold almost 2 million in the U.S. alone.


Remix credits include, among many others, works for U2, Rolling Stones, Michael Jackson, Justin Timberlake, Madonna, Paris Hilton Jennifer Lopez, Salt N Pepa and The Cure.


As a touring musician, Oakenfold has DJ’d in hundreds of places around the world. Some unique locations he has appeared at include the Great Wall in China, the Hollywood Bowl in Los Angeles (sold out) and Red Rocks Amphitheatre in Colorado. Other foreign territories he’s appeared include Cypress, Lebanon, Ibiza, Korea and more. He’s also noted as one of the most well traveled electronic touring artists within the United States.


Paul Oakenfold was the star of Spike TV series The Club and had a cameo appearance in the film The Rules of Attraction.


Prior to becoming a world famous DJ and producer, Oakenfold served as an A&R consultant for Profile Records and Def Jam, where he signed artists including Salt N’ Pepa, DJ Jazzy Jeff and Will Smith.


Paul Oakenfold was born in London, England and currently resides in the U.S. Before becoming a major force in the music industry he graduated from the Westminster Technical culinary institute becoming a certified chef. He was also an investor along with rockers Tommy Lee and Dave Navarro in the Hollywood, CA nightlife establishment Rokbar.