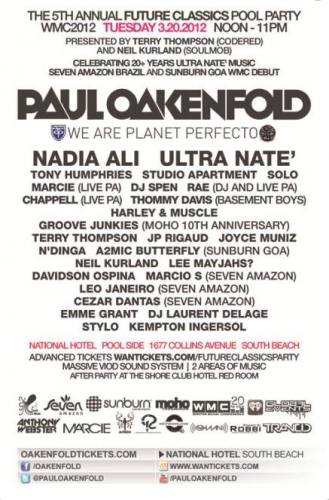 The Future Classics Pool Party Returns to the WMC for its 5th installment of infectious house music at the National Hotel. This sexy pool party is going to be epic. Headlining the Future Classics party is the world famous Paul Oakenfold.

Astonishingly, despite all his success in the worlds of chart music and film, Oakenfold has found time to keep in touch with his roots as a club DJ. The last 3 years he held a weekly residency at the legendary Rain Nightclub at Palms Casino Resort in Las Vegas. Perfecto Vegas was a fully produced show with 75 circus performers, cutting edge visuals and special effects – giving the 3,000–strong crowd a truly unique experience. In 2012 Paul will tour world wide supporting the We Are Planet Perfecto compilation as well as embarking on his Four Seasons tour. He also expands his Las Vegas circuit with dates at Hyde Bellagio, Tao Nightclub at Venetian and Marquee inside The Cosmopolitan. This summer season Paul launches Perfecto Dreams, a pool concept party that will take place at the Hard Rock Hotel & Casino Las Vegas. We are honored to have him headline our event this year.

It is sometimes hard to believe that the Grammy nomination for Nadia Ali's "Fantasy" (Morgan Page Remix) is only one of many milestonesmarking her musical achievements. Nadia's career exploded as a member of"iiO" with the massive 2001 hit, "Rapture". Quickly leaping to #2 on the UK Singles chart, "Rapture" would propel Nadia into the spotlight and serve as a shadow of things to come. Now armed with a solid decade of commercial success and an almost feverish evolution of artistic expansion… Something tells us that Nadia Ali is just warming up. To date, Nadia's career as singer/songwriter has attracted a massive international following resulting from a masterful exploitation of captivating vocals and dance music. Nadia has attributed this unmistakable style to the overarching influence of her eastern ancestry, as well as the diverse cultural climate of her upbringing in Queens, New York.

Beginning in 2001, Nadia's lush vocal style would take the world by storm, becoming a globally recognized trademark in the dance music industry, and keeping her in nonstop demand by the hottest innovative DJ's worldwide. Recent and notable collaborations include: Schiller, Sultan & Ned Shepard, Chris Reece,Tocadisco, Serge Devant and Starkillers. In the mean time, Nadia's recent team up with Armin Van Buuren, (ranked the # 1 DJ in the world for 4 consecutive years), has been generating a white-hot buzz. Jointly, Nadia and Armin shaped the brand-new dance track: "Feels So Good" and are currently carrying out a rigorous tour schedule on the "Armin Only Mirage" tour."Armin Only" is an entirely sold-out world tour, filling arenas with tens of thousands of fans nightly.

Nadia Ali has continually proven her value with a growing list of global hits and chart-toppers that has expanded progressively over the years. These include: "Rapture","At The End", "Kiss You", and a #1 US Billboard Dance Chart hit with "Is It Love" in 2006. Nadia's solo album "Embers"was released in 2009 and "Fantasy" soon followed, serving as aprologue to "Queen of Clubs Trilogy: Best of Nadia Ali Remixed". In2010, Nadia was nominated for Best Progressive/Tech House Track for "LoveStory" at the International Dance Music Awards at the Winter Music Conference. She then neatly closed out the year 2010 with a Grammy nomination for her song "Fantasy", under the "Best Re-mixed Recording"category. While Nadia has cultivated a score of industry accolades, 2010 marked the first occasion in which her work would receive the great honor and validation of a Grammy Nomination. If we are to learn anything from the pattern developing here, it could quite possibly be that Nadia Ali simply possesses both the clever intellect and raw talent required to amass this kind of staying power… and that this past decade has only been the beginning. Get ready for Nadia to rock the Future Classics Party.

As an added punch to the event, Ultra Nate' will be celebrating her 20 plus years in House Music. In her two decades of making music, Ultra Naté has remained a musical chameleon, embracing a variety of sounds, from R&B/hip-hop, soul and disco to house, rock and electro-pop. Twenty years after sashaying onto international dance floors with the club anthem, “It’s Over Now,” Naté stands tall and proud, proving that artist longevity, though not common for singers of dance music, is alive and well—and a real possibility for those willing to work hard for the money.

Ultra Naté’s 20 plus years in the business comes at a time of non-stop work and recording sessions. In addition to prepping her eighth studio album Hero Worship (set for release in 2012), Ultra Naté’s been busy in the studio with David Morales (for his upcoming album and hers); Robbie Rivera (for his new album); Quentin Harris (a project entitled Black Stereo Faith that Naté describes as “sexy soul meets rock with a twinge of disco funk”); Nervo (co-writers of David Guetta’s worldwide chart topping “When Love Takes Over” featuring Kelly Rowland) and Nicola Fasano (Italian DJ/producer responsible for the club hit “75, Brazil Street,” which was reworked by rapper Pitbull for his smash single, “I Know You Want Me”) and a new EP project with Baltimore’s Unruly Records crew entitled “Things Happen at Night” (a mix of hyped-up hip-hopgrooves, raw house beats, heaving bass and ass-shaking beats). Additional collaborations include “Waiting On You,” a funky disco duet with Destiny’s Child’s Michelle Williams,”Right Now,” with house music innovator Todd Terry and the chart-topping “Destination,” with Tony Moran, a circuit party anthemwhich has just gone top 10 on Billboard’s club chart.

Ultra Nate’ will perform many of her international dance hits. To round out the party, legendary Tony Humphries, Japan’s Studio Apartment, Italy’s Harley&Muscle,Groove Junkies, DJ Spen, Joyce Muniz, and plenty of other top international acts and live performances to be announced.

Finally, weare also proud to partner with Sunburn Goa and Seven Amazon out of Brazil, which will make their debut at the WMC during the Future Classics Pool Party with its own stage. Sunburn is an electronicdance music festival held in Candolim Beach, Goa, India. The festival is anamalgamation of music,entertainment, food and shopping, and was ranked by CNN in 2009 as the ninth best festival in the world. The festival is organized by Shailendra Singh in partnership with Nikhil Chinapa. Held over three days, the festival has multiple stages with artists playing simultaneously daily.

SevenAmazon is the biggest electronic music company in Manaus - Amazonas - Brazil producing outstanding events including cutting edge artists in its line-up. SevenAmazon has included on the route of Brazil's night life, like São Paulo and Santa Catarina, always looking for the cutting edge of music and giving its audience the Best. Expect to see some amazing talent and surprise guests on the Sunburn and Seven Amazon stage.

The sound system is massive. 2 areas of music. This is going to be "EPIC". We gathered all of your favorite producers/djs from around the world for one smashing party. Get your limited advanced tickets now.