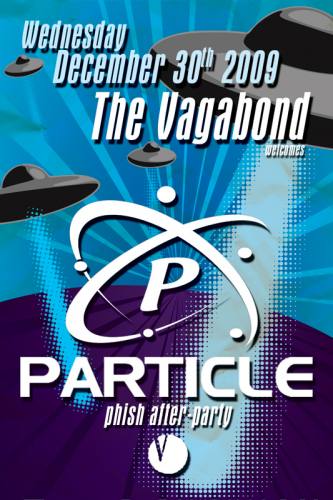 NYE Dress Code: NO SHORTS . NO SANDALS . NO BACKPACKS
The Vagabond
December 31st, 2009
*
NEW YEARS EVE
2010
VAGABONDS UNITED
*
Special Live Performance by
PARTICLE
*
Music Orchestrations
Ray Milian . Ryan Evans . Danny Ashe . C-Stone . A-Train
Door Open at 10pm
Complimentary Champagne Toast and Party Favors at Midnight
Special Thanks To Our Family Within
Stone Groove . Shake . Sweat Records . Back Door Bamby
A little info on PARTICLE:
Seeing Particle live is less like a concert and more like accelerating through planet earth’s musical stratosphere. Particle’s Eric Gould, Darren Pujalet, and Seteve Molitz will start off the set sounding like a The Allman Brothers and end up transforming into Apex Twin throughout the course of a night. As one of the first jam bands to fuse live instruments and electronic music, they’re regarded as one of the pioneers of the “livetronica” genre. They’re also deeply rooted in the organic, utilizing live instruments for all of their shows. In the summer of 2005, Particle toured with former Grateful Dead drummer Mickey Hart and bassist Phil Lesh sat in will the band. Much like their contemporaries, they’ve amassed a loyal following, dubbed Particle People.
EARLY ARRIVAL IS STRONGLY SUGGESTED.
Don't forget to bring your ID, the credit card that you used to purchase your tickets and your receipt or we will not release your tickets.
In case of complications with pick up you must see the door manager in order to record/document the problem. If your problem is not documented you will not qualify for a refund.