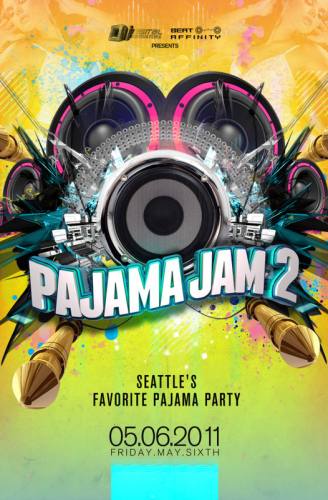 
Last years Pajama Jam sold out an hour and a half after the doors opened, we turned away over 300 people and was 1 in 1 out for the remainder of the evening.  This year we're doing it even bigger.  We've moved it to a venue that can handle twice as many people as last year, and we're booking talent from across the globe. We have also brought Beataffinity onboard so expect an amazing night.

After a massive success in his homeland, Australia, and opportunities overseas, Nitrouz has played at all the leading events and club nights across the world, such as Defqon 1 (both the Dutch and Australian edition) in which he was the only Australian to play on main stage. He also represented Australia playing at X-Qlusive Showtek NL, Q-Dance World Tour, Magic City, Utopia and many many more. Now Nitrouz is out to conquer the rest of the globe!

His unique blend of hardstyle will leave you begging for more as Nitrouz gives an unforgettable performance of non-stop adrenaline rushing music! The energy and enthusiasm he brings to the stage shows his absolute suitability to DJ-ing. All the above underlined once more why he's the king and undisputable #1 hardstyle DJ of Australia.

In addition to his achievements back home and overseas, Nitrouz has now geared up with the world's number 1 hardstyle label, Dutch Master Works. His recent release "Crazy Music" was in the top 3 on numerous download platforms for 2 weeks and in the top 5 for 4 weeks. Nitrouz is also the first non-Dutch producer to remix an anthem for Defqon 1 that gained worldwide recognition.

Keep your ears open for this Aussie star, as there will be many more hits to come throughout the career of this pioneering Australian artist!

Representing the harder sounds in the Bay Area for over 10 years, DJ Crackerjack has been a force to be reckoned all over the United States. He has held many regular residencies in some of the biggest San Francisco hotspots. He has headlined almost every major US city and his unique sound has even infected Europe. He is an accomplished producer releasing upfront tracks with artists such as No Left Turn and Reese. He gained national and international attention with his remix of DHT's "Listen To Your Heart" and his infamous CD entitled "Crowd Pleaser." He has acquired thousands of loyal fans across the US over the last ten years and will continue to do so into the new decade.

DANCERS and PERFORMERS BY:

$20 with REAL Pajama's on, and NO lingerie does not count as pajamas. haha