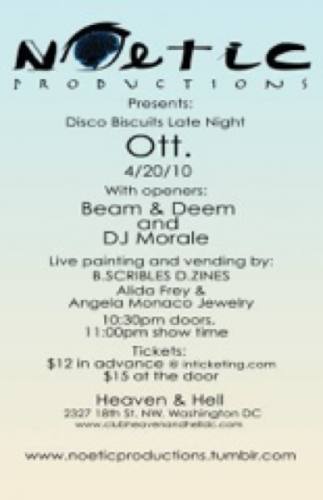 What: Ott (Disco Biscuits after party)

Noetic Productions presents UK Psy-Dub DJ and Producer Ott at Heaven and Hell on April 20. This very special event will follow The Disco Biscuits at 9:30 Club. Philly based ambient DJ duo Beam & Deem and New York City based breakbeat DJ Morale will open the night.
The April 20th event will be a multi-sensory experience that will include art and fashion in addition to the musical acts. There will be clothing and jewelry design by B. Skribles Designs and Angela Monaco. Artist Alida Frey will have art on display and will create a live painting that will be auctioned off at the end of the night.
Tickets are $12 presale, available at inticketing.com, and will be $15 at the door. Doors will open at 10:30 p.m. and openers will start at 11:00 p.m. Ott’s set will begin at 1:30, after The Disco Biscuits’ show has ended. Admission is 21 and up.
OTT - Ott’s sound is heavily influence by acts like the Orb and Dub Syndicate, who combine bass-heavy rhythm, abstract soundscapes, and timeless melody. At the end of the twentieth century Ott moved from London to a remote cottage in South West England. Here he embarked on a series of sonic experiments, drawing heavily on the classic dub sounds from Jamaica and hypnotic electronic pulse from German groups like Neu and Kraftwerk. In 2002 Ott released his first album, “Hallucinagen in Dub,” through Twisted Records. These slower, fatter, and chill out friendly remixes of classic Hallucinogen trance tracks met critical acclaim. A whirlwind of touring and collaborations helped solidify Ott as a major name in the electronic and festival scene and laid the groundwork for the success of original albums “Blumenkraft” and “Skylon”.
BEAM & DEEM - consisting of Zach Catarelli and Chris Coffey, is a fresh and innovative act that creates a multi-sensory experience, catapulting the listener into a soundscape where classical elements create a welcoming familiarity, but where the air is also tinged with unexpectedness. In an era where the evolution of music involves merging mind with technology, Beam&Deem offers a breath of life into the machine, generating a unique sound that will shake both your mind and your behind.
DJ MORALE - a Bay Area native now living in New York, has been rocking dance floors across the states for years, constantly gaining popularity and playing ever-larger shows. He sticks to his guns of punchy beats and heavy bass to get the crowds moving, spinning tracks from a wide variety of genres including breaks, booty bass, glitch, electro fidget/hip-house, dubstep, hip hop, and party classics and BASSSSSSSSSSSSSSSS!
noeticproductions.tumblr.com/