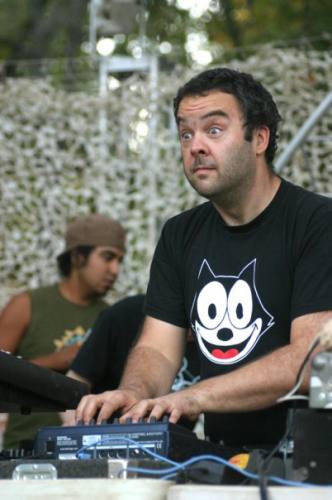 Ott was doomed to be a teenager in the cultural wasteland that was the mid-1980's provincial England.  After a brief period wandering aimlessly through the hairsprayed deserts of New Romanticism and

poodle-rock he found refuge in the warm, inviting sounds of Scientist, King Tubby, LKJ, and Prince Far-I and the effortless grace of European experimentalists Neu! and Kraftwerk.  Here he stayed until he felt it was safe to pop his head up again.

The end of the 1980's brought with it a cultural and musical revolution and Ott headed to London to immerse himself in the new energy. Initially unimpressed by the frantic, unmusical clatterings of acid house and "rave" he discovered a new wave of artists who apparently shared his love of organic dub and

pristine electronics.  Artists such as The Orb, Dub Syndicate, FSOL and African Head Charge.  These were people who were unafraid to combine bass-heavy rhythm, abstract soundscape and timeless

melody into a huge, ever-shifting sonic universe which reflected perfectly the spirit of hope and positivity which prevailed.

It was at this point that Ott found his first work as an engineer in several studios around North London.  Working obsessively, 18 hours a day, seven days a week for the next ten years, Ott began developing the skills which would see him go on to work with many of those who created the sounds which inspired him in the first place - Brian Eno, The Orb, Youth, African Head Charge, Steve Hillage, and On-U-Sound.

After spending the 1990's freelancing around London as a studio engineer and producer, Ott celebrated the end of the 20th century and the beginning of the 21st by giving it all up and moving to a remote cottage in South West England to be alone with his cats and his studio.  With a vague plan to create the perfect soundtrack to an outdoor English festival he embarked on a series of sonic experiments, drawing heavily on the classic dub sounds from Jamaica and hypnotic electronic pulse from Germany which had

provided such a refuge during the 1980's.  A period of intense creativity followed, during which a great many tracks were created and then stashed away on tapes, seemingly never to see the light of day.

In the meantime, Ott hatched a plan to remix half a dozen or so classic Hallucinogen trance tracks and release them as dub mixes - slower, fatter and more chillout friendly.  In 2002 the album "Hallucinogen in Dub" was released via Twisted Records to universal acclaim.

Buoyed by the success of "Hallucinogen in Dub", the following year Ott gathered together and released his earlier sonic experiments as the album "Blumenkraft" which was also very well received and which

attracted a great many listeners around the world.

The next few years passed in a whirl of gigs, remixes [Shpongle, Entheogenic, Tripswitch] and collaborative projects - "Umberloid" with friend and multi-instrumentalist Chris Barker, and "Gargoyles"

with Simon Posford [Hallucinogen, Shpongle].  During this time Ott travelled the world, got married, welcomed his daughter Daisy to the world and wrote his third album "Skylon" - which was released on

check out the "Smoked Glass and Chrome" video:

Coming off the wildly successful Invisible Allies tour with Bluetech, KiloWatts has come home with a head full of new ideas for the studio  some tangible, others bananas. Whether expressing the warmth of the heart through lush chords and melodies, or engaging extraterrestrial aliens through twisted granular tractor beams, James Watts is committed to sharing music with the world, and beyond.

One of the most prolific artists of the era, KiloWatts has worked with some of the greatest minds in the industry, including Bluetech, Bil Bless, Tanner Ross, Peter Van Ewijk, and labels Native State Records, Mothership, Dependent, Harmonious Discord, and Thoughtless Music. In 2010, he set off on a 12,000-mile tour across the US and Canada with cohorts Aligning Minds and The Great Mundane. This year included releases on the Canadian Thoughtless Music label, and Harmonious Discord, based in Austin. His own imprint, KiloWatts Music, showcased a new solo EP, "The Right Words". His most recent endeavor, Invisible Allies, is a collaboration with Bluetech, exploring futuristic spacefunk, textural ambient, odd time signatures, complex harmonic developments, detailed digitalia and a sublime sense of the exotic.

A classically trained pianist, his work now embraces the bulk of electronic genres, including breaks, IDM, techno, and downtempo. His albums on Artificial Music Machine that are full of visionary dimensions, fusing together a dexterous knowledge of sound synthesis, deep emotional articulation, and solid melodic intuition. Peppered throughout these monumental statements are releases with class labels such as Somnia, Thoughtless Music, and his own outlet, KiloWatts Music, that celebrate his adept technical expertise, often bringing a whirlwind of digital wizardry in the form of glitches and edits. The list of projects and collaborations continues to grow, but some of the highlights are: Skeetaz, with breakbeat cohort Bil Bless brings hard-hitting digital glitched-out psychedelic funk. His collaboration with singer Peter Van Ewijk is a mystical ride with vocals and guitar, nested atop edgy electronica. With Tanner Ross, an eerie style of dark techno is born under the name Voodeux for Dirtybird's techno sublabel Mothership. Fellow Philadelphian MC Amagine delivers consciousness-driven motifs in their digital glitch-hop project called Super Galactic Expansive.