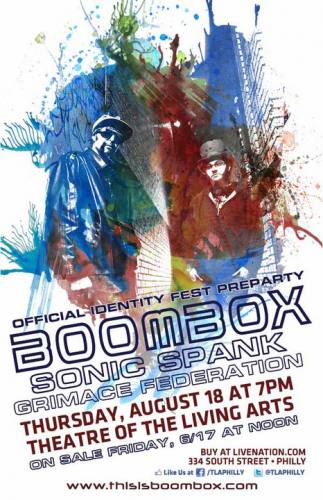 This August 18th we are excited to bring you the OFFICIAL Identity Festival pre-party for Philadelphia. This special show will feature BoomBox along with special guests Sonic Spank and Grimace Federation. See you there :)

BoomBox is Producer/Engineer/DJ/Drummer Russ Randolph and Producer/DJ/Vocalist/Guitarist Zion Rock Godchaux. This pair of dynamic artists uses their rich musical history and their vision of music and popular culture to deliver a style of music distinctly different from anything heard or seen in music today. This signature sound and show brings live music to a new, elevated level.

BoomBox evolved through the common visualization of a pair of forward thinking artists from diverse musical backgrounds. Raised by supportive and musically inclined parents, both Godchaux and Randolph had an obsession with music at very young ages. Godchaux, who grew up with deeply embedded rock and roll roots, began playing drums at the age of two, and played guitar and wrote his own songs as a teen. During the 90s, Godchaux was a well-received touring DJ based out of the San Francisco area. Randolph began as a young drummer, but it's what was happening behind the scenes that attracted him most. As much producers as they are musicians, it is Randolph's understanding of soundscape and Godchaux's knack for songwriting that keeps BoomBox resonating at higher levels.

SONIC SPANK was formed in early 2009 by Benjamin Karp & Ian McGuire. In 2010 they added drummer Scotty Zwang. The trio seamlessly blends House, Hip Hop, Drum & Bass, Jazz, Funk and Dubstep beats while incorporating live keyboard and guitar improvisation on top. Ben & Ian have been friends since Preschool and have collaborated on music since the beginning of High School which explains their undeniable chemistry on stage and innocent perversion. SONIC SPANK penetrates the line between the craft of DJing and virtuoso instrumental musicianship.

SONIC SPANK has already made appearances at regional clubs, parties, radio stations and festivals with an enthusiastic response from audiences. So far, SONIC SPANK has been billed with major national/international acts including the Disco Biscuits, Pretty Lights, Lotus, Crystal Method, The New Deal, Infected Mushroom, Pnuma Live PA and The Egg.

Grimace Federation creates morphing, sonic, textured movements which groove and swerve pleasantly between the progressive and the old school. Built from an improvisational fusion guitar trio (guitar, bass, drums), Grimace used lush chords and raw drum n bass beats to develop a funky jazz tweaked indie-rock sound that rocked house parties across Philly. In an effort to continually change, always staying dynamic and heavy, the band added a 2nd drummer, a New York vibraphonist and a fretless bassist forming the lineup that is Grimace Federation today. Now the quintet crafts complex and subtle instrumental pieces that are as deep as they are classic; referencing Radiohead, A Tribe Called Quest, and Stereolab as much as George Harrison, Ry Cooder and Art Blakey. The sound is an aesthetic that is truly unique.