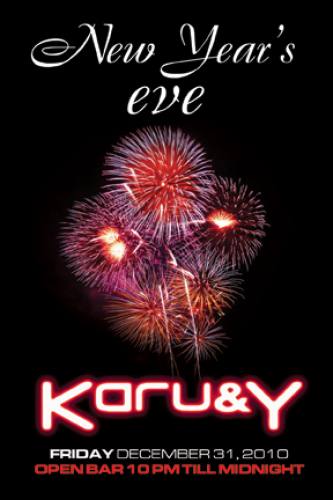 What better way is there than to celebrate the New Year by partying with Dj Dan and Austin Leeds with an open bar 10pm till midnight! Indoor/Outdoor Venue with plenty VIP Seating with bottle service. Downtown Miami Location - The super plush night club Karu & Y

Miami’s Premiere Night Club. Karu & Y will feature a Open Bar for all our guests untill the beginning of the new year, and two rooms of entertainment:

The venue from another dimension. Where time, space, and light can be crafted to capture your imaginative and evocative visions, the Buddha Club. This dynamic entertainment concept draws its name from the far east inspired decor. With over thirty movable 11 foot totems the bequeath a timeles, almost surreal mystique into over 5,000 square feet, this room is one of endless possibilities with its customizable space. Tantalizing beats emminate from the worl acclaimed sound system. Accommodating up to 800 VIP’s, the Buddha Club’s light, sound, and visual effects will imbue any event with aura of near supernatural beauty and inspiration.

The allure of Eden. Temptation was never so beautifully serene and beguiiling. Hidden away beneath the brilliant Miami skyline, a sub-tropical paradise beckins you. Buddha Gardens, a 13,000-square foot hedonistic dreamland. An incredibly lush fantasy retreat that will envelop your every sense. Wooden bridges that arch over peaceful meandering rivers access seven splendid private island cabanas and five cascading waterfalls add spice to this hypnotically beautiful venue. Here, amid the raw, wondrous beauty, you can reconnect with your primordial, untamed self.

DJ Dan began spinning in L.A.'s early '90s rave scene and then became the main DJ for San Francisco's aptly-named Funky Techno Tribe. Along with headlining raves in the US and worldwide, DJ Dan has remixed popular dance artists such as Cirrus and released albums and singles on labels such as Ultimatum, Kinetic and Moonshine, including 1998's Beats 4 Freaks, 1999's Funk The System and 2000's Put That Record Back On.

DJ Dan was raised in Seattle and eventually settled in Pasadena and San Francisco, California. Living in California exposed Dan to different kinds of music; such as high energy and hip-hop and rap from Los Angeles and disco and house from San Francisco. Originally a fashion design major, Dan put design on hold when he decided that music was his true calling. In 1996 Dan released his first mix CD, Loose Caboose. After building a DJ career locally, Dan started building a production career. The production aspect took off for Dan when he did a remix for Orgy's cover of "Blue Monday." In 1998 he released the mix CD, Beats 4 Freaks on Moonshine. Dan put himself on the club hit map with the release of "That Zipper Track" and "Needle Damage" in 1999. The tracks exploded onto the club circuit and were further impacted with the release of remixes by Terry Mullan and the mix CD, Funk the System. The popularity of the releases earned him a slot on a world wide tour with fellow label artist Carl Coxand producing remixes for other Moonshine artists like Cirrus. Another Late Night along with the single Put That Record Back On followed in 2000, speeding along Dan's career.

Playing and producing music that has stimulated and mesmerized crowds , Austin Leeds has created his own distinct movement in the global dance music community. His unforgettable mixes have been heard in the most respected and desirable clubs around the world. His innovative sounds and productions have led to many studio collaborations with some of the finest DJs and producers in the industry.

Austins recent productions with Nick Terranova (Los Angeles) and Kobbe ( Belgium) have been getting massive reactions. Theyve taken the electro house sound, fused it with tribal beats, and molded them all into an explosive new style. Terranova and Austin Leedss singles Shake Me , Rock Me , and Only You all have been topping the charts and destroying clubs around the world . These singles have been on numerous CD compilations and played in clubs and radio everywhere. Recently, Only You was played by Deep Dish on their Radio 1 Essential Mix live from Global Gathering. Austin also co-wrote Discoteka and Scream with Nick Terranova for his Starkillers project. Discoteka has been a massive worldwide hit, spending weeks at ..1 on www.Beatport.com, licensed by numerous labels, and featured on many CD compilations. Austin also has a project with Kobbe called "The Land Of Voodoo" .Their project has been supported by the biggest names in house music. Danny Tenaglia, Erick Morillo, DJ Vibe, Oscar G., Deep Dish, John Digweed, Sader Kleinenberg, and Superchumbo are just a short list of world class DJ's and producers who are fans of Austins sound.

Austin also has been running Hamachi Records since 2001. He also assists with Terratraxx with Nick Terranova.

MIAMI – Few DJ/producers ascend to the heights of greatness, where their live sets are considered as valuable and inimitable as those of skilled orchestral conductors. Having been a professional DJ since 1986, Ivano Bellini today exemplifies the term *superstar DJ* with his long-running “Sunrise Sessions” afterhours residency. A resident DJ on the famed Terrace at Miami’s Club Space for seven years (since its inception in the original Space), Bellini was nominated as “Best Resident DJ” at the 2006 Club World Awards.

Ivano Bellini’s sound is intoxicatingly sophisticated, irresistibly sexy and full of hidden pleasures. At a time when advances in technology produce fledgling producers at a dime-a-dozen, Bellini is among the rare breed of *global DJs* whose name on a club flyer is enough to draw crowds from far and wide. With a catalog of his own artist tracks, popular remixes, compilations and a full-length artist album on the way, Bellini has established himself in the dance music industry as a penultimate professional.