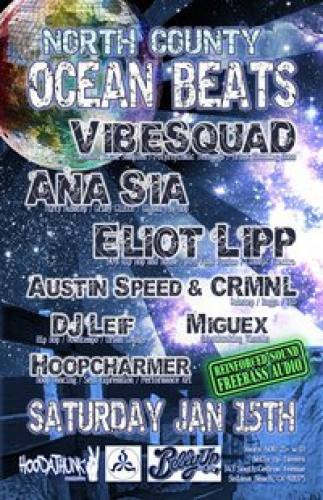 Ocean Beats, the ever-popular evening of dubstep, glitch, hip-hop and crunk is back! And this time we're bringin' in north, to the Belly Up Tavern in Solana Beach! We’re excited to bring you very special performances by:

or. His tra...ined musical background contribute to his unique take on electronic music, which carries him around the country playing packed clubs coast to coast.

Since VibeSquaD’s inception in 2007, he has released three full-length albums, two previous EP’s, as well as remixes and singles for Interchill, Multi Music and Proboscis. Another full length, The Fire dropped on 10/21 and showcases his top-notch production skills and originality. The album is charged with the energy and positivity that has come to define VibeSquaD’s signature sound and vibrant stage persona.

**Ana Sia** (SF/Oakland) Straight off a show-packed summer and fall that included stops at Red Rocks, Wanderlust and Lollapalooza, and a headlining evening at the Ogden in Denver, Ana Sia's back to bring the her infectious sound to San Diego. She's an Ocean Beats veteran and a SoCal fave in the underground movement. Uniting the best elements of grimy glitch, dirty dubstep and a quintessential sound, Ana Sia's sets confirm crunk status of all who dare enter into her world of sound.

**Eliot Lipp** (Brooklyn) - AKA Sir Lipp, is known as one of the foremost electronic producers in the world using vintage gear to create a unique crossbreed of 90’s Hip Hop and House, 7...0’s Funk fusion as well as classic Electro. Lipp’s beats can be found in many places including the live sets and albums of many artists including STS9, Bassnectar, Pretty Lights among many others.

**CRMNL and Austin Speed** (San Diego) Two of the hardest workers in the scene, Austin Speed and CRMNL are Sublmnl Sound System. These two know how to move your body with bass that doesn't quit and leaves you wanting more.

Inspired by the Mushroom Jazz album’s of legendary DJ/Producer Mark Farina, his style is smooth and clean, and blends beats you don’t often hear mixed but will love when you do.

With LIVE VISUALS by MIGUEX (Modul8)!!

Go-Go and Hoop Dancers by HoopCharmer