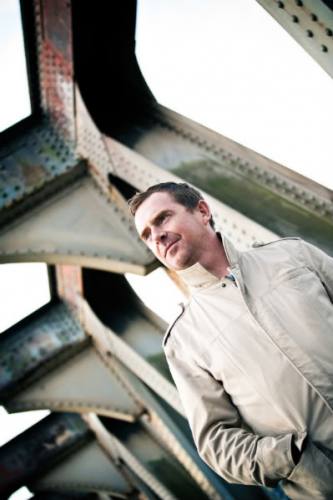 NICK WARREN
You can tell when Nick Warren's on the decks. The music emanating from the DJ booth is that perfect club mix of driving percussion and soaring musicality, bursting out of the speakers, soaking everyone in melody, drenching them in sound. On the floor, where it really matters, the crowd experiences all the peaks and troughs that make Warren’s sensibility so unique. He might start with his deeper take on house, gradually morph into harder territory; then, once Warren has the throng fully in his grip, sweating and losing themselves in the music, moving on instinct, he takes them to points unknown they never expected to go. That's why Nick Warren is so respected: he knows how to truly work a crowd, delivering again and again, yet taking them somewhere they’ve never been before. That's what comes with vision and, just as importantly in Warren’s case, experience.
To this day, Warren remains at the forefront of club culture: he packs clubs and arenas worldwide from London to Los Angeles to Taipei, transfixing dancefloors with his distinctively forward blend of credible progressive sounds, cutting-edge techno, atmospheric layers and any other grooves Warren deems appropriate for his turntable alchemy. 2008 also finds Warren reaching other milestones. He’s releasing his eighth mix CD for the Global Underground series, GU035: Lima; he’s also completing his fourth studio album with Way Out West, Warren’s pioneering electronic/band collaboration with Jody Wisternoff. Warren also recently became head of A&R for Hope Recordings, keeping him immersed in the shifting tides of new dance-music movements. “I’m doing same thing I did when I started—just playing music I love,” he says. “It’s as inspiring as ever. In Lima, we did the party for the Global mix on the grass in front of a stadium, and the crowd was as enthusiastic and curious as any I’ve ever had. It was one of the best parties I’ve ever done.”
What makes Warren’s vision continue to resonate is that he’s honed it over the years. He was there for the dawn of today’s club culture, and the original ethos of bringing integrity and a forward, future-looking aesthetic to what he does never left him. Warren began spinning at free parties in fields during acid house’s halcyon “Summer of Love” back in ’88: then, the revelry typically ended around lunchtime two days after the rave began, and seminal electronic artists like Leftfield and Orbital were making their mark with their first tracks. The culture was so new, DJs weren’t considered the icons they are today; if you were behind the decks, you were doing it for the music above all else, not money or fame. Despite Warren’s continuing success, that original motivation has never left him. “We never wanted to be ‘superstar DJs,’” Warren says of himself and his peers that rose to fame out of the dance-music revolution. “There was no such thing. I was just lucky to be there at the beginning. In those days, we were focused on creating and playing the next thing—music no one else had ever heard.”
Warren’s DJ sets always were set apart by their moody atmosphere—a key element of music from his Bristol hometown. Warren ascribes that to the influence of the city’s multicultural makeup, which found punters of all races attending dub parties from the likes of Jah Shaka. “Seeing him make so many sounds with just one turntable was incredible,” Warren recalls. “It was all about moving hips, about reverb, about the space between sounds. That epic silence in the right place became the sound of Bristol.”
“The ‘control freak’ side that every DJ has still comes out in me whenever I play music in a dark room,” he explains. “Whether it’s 600 people in a club or 10,000 at a festival, I love that I can take the crowd anywhere. It’s amazing I’m still surprised every day. When I stop searching for music, I’ll have to quit. But the moment, I’m as excited as I’ve ever been.”
NICK WARREN [djnickwarren.com, Hope Recordings]
CHRIS WALSH
RJ PICKENS
VISION DOME ROOM
:HIP-HOP & DANCE FAV'S:.
DJ SPIN [B96 | dj-spin.com]
DJ Mach 1 [103.5 kiss fm]
TICKET INFO
Presale General Admission - $15
Reduced Admission RSVP: Click HERE to RSVP
$15 before 12am
TABLE RESERVATIONS
In need of some extra VIP treatment? Call VIP Hosts
Joe B. or Catherine at 312.504.9400
CELEBRATING A SPECIAL OCCASION?
Contact Ashley Mills at 312.266.1944 or send her an email at amills@aceplaces.com.