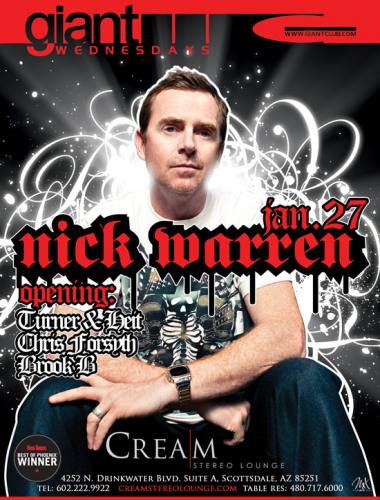 You can tell when Nick Warren’s on the decks. The music emanating from the man is that perfect club mix of driving percussion and soaring musicality, bursting out of the speakers, soaking everyone in melody, drenching them in sound. On the floor, where it really matters, his crowd experience all the peaks and troughs that make his music so unique. Locking on early, you’ll hear his deeper take on house which morphs, as the club mood changes, into harder territory, music for sweating and losing yourself to. That’s why Nick Warren is so respected, because he knows how to truly work a club, to take a crowd high, then higher again. That’s what comes with vision and, just as importantly, experience. Nick, a music obsessive who grew up on punk, reggae and pop was, like so many DJs turned onto the power of house music in the late 80s. Living in Bristol, he’d been playing tunes for a few years before, running his own club night, Wiggle. In 1990, a new house club, Vision took the city by storm and in a perfect bit of timing, he was offered the chance to play in the upstairs room, spinning weird downbeat Balearic records and mixing house with music by The Clash and Frank Sinatra. Catching the attention of a group of guys who had their own band, he was roped in to tour with them as their DJ when they went to play America. The group was Massive Attack. As their official DJ, he began working on music of his own, even joining the Massive remixing team at one stage. At the same time, people were beginning to notice this quietly-spoken DJ from Bristol, the way that he really understood what made people dance, yet never compromised his vision of what good music should be. Here was someone, the dance music magazines said, who could rock it with the best of them, yet who also stood out as a person with their own unique style, mixing straight up house with trancier material, throwing in breakbeats to keep the flow going, playing the most up to the minute music that somehow also reflected a rich musical heritage. Joining up with another Bristol producer, Jody Wisternoff in 1994 to form Way Out West, they recorded the seminal ‘Ajare’ single together, a huge progressive house club hit. Then came ‘The Gift’, sending Nick and Jody onto Top Of The Pops and catapulting Nick into the league of the superstar DJ. Their album, ‘Blue’ took every single one of the pair’s influences and shaped them into a groundbreaking collection of tracks that stayed in the CD players of the UK and beyond for a long, long time. Nick was now travelling the world as a DJ. Liverpool superclub, Cream offered him a residency in recognition of his talent and in 1999 he recorded his first mix, Prague, for the highly respected Global Underground mix CD series, followed by Brazil, Budapest, Amsterdam, Reykjavik, Shanghai and Paris. At present he is touring the world, working on a new Way Out West album with Jody and working as the director of A&R at Hope Recordings.