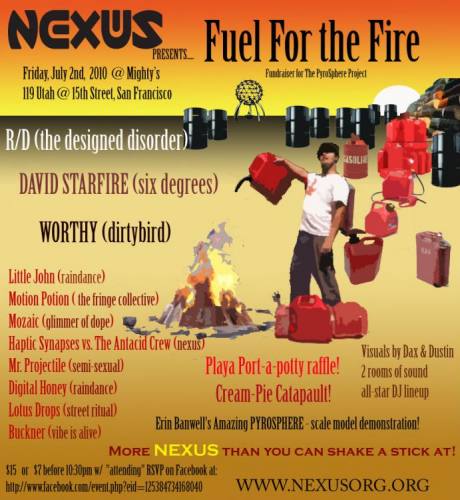 What: Nexus presents Fuel For the Fire

This year at Burning Man NEXUS is bringing it bigger than ever and we need your help – we need you to come to a sick party in San Francisco and rock out on the dance floor to some of our favorite DJs – think you can do that?
This is all in the name of supporting the NEXUS PYROSPHERE, a 37 foot tall interactive fire sculpture – designed by Erin Banwell – that we’re bringing to the playa this year.
And besides who better to celebrate your Independence with than the NEXUS family?
Friday, July 2nd
FUEL FOR THE FIRE :: NEXUS PYROSPHERE FUNDRAISER
Special guests:
R/D (the designed disorder)
He absolutely leveled the Nexus dome on the playa before Tipper came on and atomized the remaining pieces – come check out what he’s all about at this rare appearance in San Francisco.
DAVID STARFIRE (six degrees)
A long-time producer and multi-instrumentalist, David Starfire never fails to bring the tribal whomp. David’s Bollyhood Bass Remix EP just dropped with remixes by Sub Swara, An-ten-Nae, ill Gates, Mochipet and Jef Stott.
WORTHY (dirtybird)
A true hero of the San Francisco underground, OG dirtybird and Anabatic label head will be gracing us with a master class in underground techno.
with:
Little John (raindance)
Motion Potion ( the fringe collective)
Mozaic (glimmer of dope)
Haptic Synapses vs. The Antacid Crew (nexus)
Mr. Projectile (semi-sexual)
Digital Honey (raindance)
Lotus Drops (street ritual)
Buckner (vibe is alive)
Mad genius Erin Banwell’s Amazing PYROSPHERE – scale model and demonstration
Cream-Pie Catapault
Visuals by Dax & Dustin
2 rooms of sound
all-star DJ lineup
pyrosphere demonstration
port-a-potty raffle
more Nexus than you can shake a stick at !!
Enter the raffle to win your very own porta potty for Burning Man – this is no joke!!
Raffle details here: http://nexusorg.org/2010/blog/win-your-own-private-porta-potty-bm/
The venue will be transformed into a Nexus approved environment.
Mighty
119 Utah @ 15th Street
$15
or
$7 before 10:30pm w/ “attending” RSVP on Facebook at:
http://www.facebook.com/event.php?eid=125384734168040
Come in your playa best and bring the heat!
NEXUS LOVES YOU