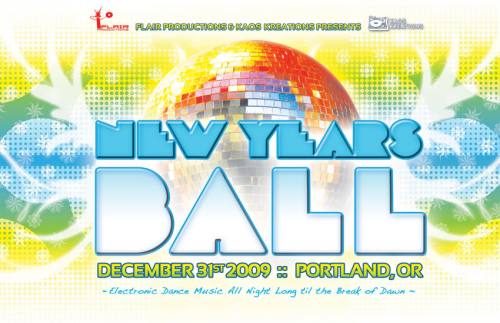 NEW YEARS BALL // DEC//31//2009 // Portland, Oregon
3 STAGES!!!
:: BREAKS // ELECTRO ::
Jaden
PDX - Bombtraxx Records / iBreaks Radio / Red Cube Productions
www.myspace.com/djjaden
www.bombtraxx.com
www.iBreaks.co.uk
www.redcubepdx.com
Since 2000, Jake Parker, aka Jaden, has locked down his spot as one of the most talented and sought-after deejays in the Pacific Northwest.
Jaden simply destroys dancefloors. Backed by a varied arsenal of stomping beats - from breaks to electro to dubstep and more - he has shared the stage with a who’s who of world class artists, from MSTRKRFT and The Stanton Warriors to John Digweed and Rabbit in the Moon, and the list goes on.
Jaden can also be found regularly headlining shows across the US, from Seattle to Denver to Florida, even reaching as far as London with his collaborations with top UK breakbeat label, iBreaks Records. In May of 2007, Jaden was picked up by iBreaks and hosts his hit radio show "Across The Pond" on www.ibreaks.co.uk on alternating Friday nights from 8-10pm PST.
In April of 2008, he was chosen as the "Dj of the Month" by Canadian webzine www.breakbeat.ca, based out of Montreal.
Recently, much of his time has been devoted to producing music and pushing his signature sound; charting himself among many of the world's heavyweights with his debut release with Triage on Bombtraxx Records. Check out his freshly produced, headbanging breaks and techfunk at www.myspace.com/djjaden.
"It has been an honor to play with him every time... Definitely a Dj to look for in the future..." - Donald Glaude (DJ/Producer - Moonshine Music / AM Only www.DonaldGlaude.com)
VIZE
---Oven Fresh / Flair - PDX
www.djvize.com
www.myspace.com/djvizepdx
Mitchell Hanson aka DJ Vize is regarded as the Pacific NW's most prolific breakbeat artist, and one of the top breakbeat dj's/artists in the USA. His combination of dj skills, successful vinyl releases and remixes, and mind-blowing synthesizer chops set him far apart from the masses. Classically trained in nearly every orchestral instrument, and well-versed in music theory and composition, he has been playing and writing music for nearly all of his life.
Vize has proven himself as a performer during his seven-plus years behind the decks and keys. He has appeared at major venues from Vancouver BC to Las Vegas to Orlando and a wide variety of places in-between. .
Combine all this with his powerfully energetic synth-driven, keyboard-skills-flexin’ Live PA and you have one of the world’s most dynamic young breakbeat artists!
SOUL KID
Baszic Elements / Next Level - SEA
DJ SoulKid got his first gigs in the late 80's during the first wave of the techno-rave invasion in clubs and underground warehouse parties in the Southeast. Being from Florida, SoulKid was influenced strongly by going to the now legendary Orlando clubs, Aahz, Mars, The Abyss, The Edge, and Barbarella, and hearing the up and coming djs of back then, like Kimball Collins, Andy Hughes, DJ Icee (now DJ Icey), D-Xtreme, Baby Anne, etc.
Wanting to promote the progressive house/trance and funky breaks sounds of Florida, he started holding parties in South Carolina and Georgia, where he exposed just that. With that kind of publicity, he started getting notoriety and was sharing the "wheels of steel" with the likes of Scott Henry, Charles Feelgood, Keoki, On-e (from Dee-Lite), Andy Hughes, etc., and acts like Ministry of Sound, Cosmic Baby, Moby, Prodigy, Lords of Acid, Dee-Lite, and Orbital. With more and more underground parties popping up, he was spinning at venues from the East coast to the West Coast, including huge events that were milestones, like Ravestock and OuterStellar Outback. As icing on his growing dj'ing career, promoters were booking him at international venues as well, playing in Tokyo, in Thailand, and recently in Manila, Philippines, and in Vancouver, BC, Canada.
Along with these events, he hosted and DJ'ed his own college radio show for five years at WSBF at Clemson University in Clemson, SC. He further enhanced his production abilities at the station by becoming Production Manager for two years, then becoming the Dance College Music Director, and ultimately the Head College Music Director. He was featured in several local newspapers as a budding underground talent. With a business mind set now, he started expanding his relationships that went beyond raves and clubs. Record stores, skate shops, and clothing stores, especially California's DJ Liquid's store Remix, sponsored many of his underground parties as a way to promote this new "underground culture".
JOE NASTY
Red Cube - PDX
BIG DADDY SCAMP
Living Funk Systems / Flair - PDX
JRAGON
Baszic Elements / Flair - OLY, WA
DJ SIDETRACKED
Late Night Renegades - PDX
About | Advertise | Contact | FAQs | Terms of Use | Privacy Policy | Accessibility Policy © 2022 - TheUntz.com. All rights reserved.