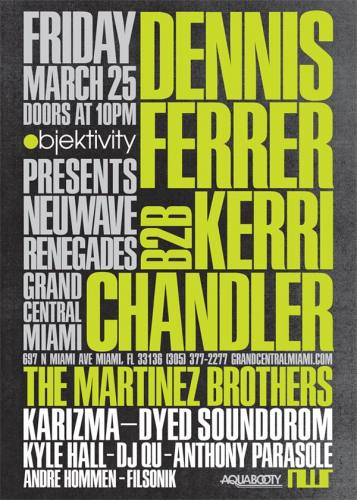 Say New Jersey to certain people and the first thing they will think of is house music – the kind of music that laid down it’s roots in late 70s / 80s Club Zanzibar home to DJs such as Tony Humphries, Tee Scott and Larry Levan. The kind of music that was slowly elaborated on and built by producers such as Blaze and many many others. into a powerful pantheon that is respected worldwide.

Today Dennis Ferrer’s New Jersey house music imprint Objektivity carries the torch for house music – continuing that vibe in a way that reflects the original spirit without being retrograde. Ferrer has been riding high on a consistent stream of praise from fans and others alike. From a Grammy nomination for his remix of Dido to his crossover hit of 2010 “Hey Hey” to his alternative vocal track of 2011, "The Red Room", Ferrer has a magic touch.

Never happy to sit on his laurels, this year Ferrer brings a new concept to Miami for Ultra Week with his hugely popular annual Objektivity event spread across two rooms in downtown Miami's Grand Central venue. NeuWave Renegades is his new project moniker and features Ferrer alongside a rotation of friends who represent something of the spirit of US house music. In Room 1 and as part of this special edition of the NeuWave Renegades tour, he will play back to back for the first time ever with his mentor and friend, Kerri Chandler. This marks the return to Miami of Chandler after years missing from the WMC circuit and in unison with Ferrer will surely be a night to be remembered. The Martinez Brothers who made their Miami debut in 2007 as Ferrer's young proteges are all grown up now and back on this years bill with a stellar single "Issshhh!!!" dropping on Objektivity in the weeks leading up to the festivities. Dyed Soundorom of the now defunct Parisienne Freak N' Chic crew and Circo Loco resident joins the lineup with his brand of modern house.

Room 2 welcomes Karizma who is back on the bill after a one year hiatus. Things just weren't the same without him and expect nothing short of the usual CDJ extravaganza with his unique take on underground and soulful house. 19 year old Kyle Hall joins this lineup as a prelude to his scheduled date at Coachella in April. Hall's eclectic blend of Detroit house, techno and bass energizes underground dance floors globally. DJ Qu and Anthony Parasole of the Deconstruct / Strength Music family mark their Miami performance debut with their edgy representation of New York deep house and techno. Objektivity soldier, Filsonik opens the night.