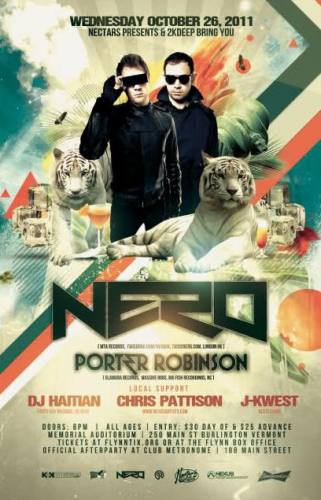 NERO are a drum and bass and dubstep duo from London, UK consisting of Dan Stephens and Joe Ray. Alana Watson provides vocals on many of the duo's songs. On 6 December 2010, Nero were announced as nominees for the BBC's Sound of 2011 poll.

Best known for their drum and bass and dubstep tracks. Nero's debut release was "This Way" in 2008. They won the 2010 Beatport awards for Best Dubstep Act and Best Dubstep Track for "Act Like You Know" in 2009. Nero are working on their debut album signed to MTA Records, owned by Chase and Status.

Sasha Frere-Jones, Journalist for the New Yorker Magazine, listed Nero's remix of The Streets, "Blinded By the Lights" in his top songs of 2009. The track had radio airplay in the UK as well as a being played by DJ's including Chase and Status, Skream, Tiësto and Diplo. More recently Nero have remixed La Roux, deadmau5, N* E* R* D and Daft Punk.

The duo released their first official single "Innocence" in the United Kingdom on 26 April 2010. The single was released as a double A-side with the track "Electron" as a digital download, as well as a vinyl. The track managed to reach a peak of number 168 on the UK Singles Chart besides peaking at number 16 and 11 on the dance and independent charts.

On 6 December 2010, the BBC announced that Nero had been nominated for the BBC's Sound of 2011 poll.

The nomination was followed by the addition of their second official single "Me & You" to BBC Radio 1's A List playlist on 8 December 2010. The single was released in the UK as both a digital download and a 12" vinyl on 2 January 2011, where it debuted at number 15 on the singles chart, also managing to reach the number-one spot on the independent-releases chart.

NERO are currently holding the number 1 single spot in the UK on the Billboard Album Chart.

Unlikely doesn't even begin to describe Porter Robinson's rapid ascent to the forefront of the world of dance music. Hailing from North Carolina, 18-year-old Porter Robinson had never set foot in a club when his smash hit "Say My Name" shot to number one on Beatport's Electro-House chart, making people do just that on dancefloors and DJ booths across the globe. Complex yet catchy, and classic yet ...cutting edge, Porter Robinson's instantly recognizable sound has earned him the raving support of legendary producers such as Tiesto, Paul Van Dyk, David Guetta, The Crystal Method and Armand Van Helden, and landed him shows across the globe – all before he had even had the chance to finish high school.

Some might call Porter a prodigy, but that label belies his musical maturity and ignores his years of production experience, which reveal themselves in the way he blends the best of seemingly distinct genres into a style uniquely his own. His massive electro hooks paired with nasty dubstep warbles and shimmering trance breakdowns transcend tired genre adjectives like "progressive" or "fidget", taking listeners into an uncharted territory of hard-hitting house music.