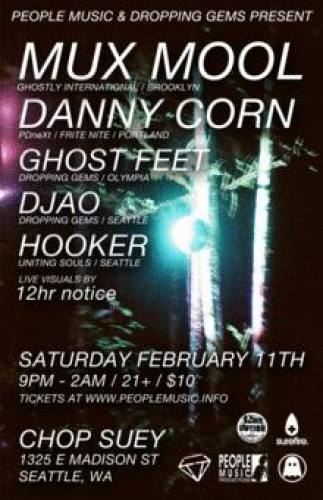 "I know it's electronic music," Brian Lindgren says, "but sometimes I feel like an old-timey traveling musician with an M-Audio Trigger Finger instead of a guitar." As Mux Mool, Lindgren has been criss-crossing the country by himself for years, collecting records, loops, and samples, and rocking parties in towns both large and boondock-small. Lindgren is a self-confessed nerd to the bone, an incurable doodler, a Star Trek: The Next Generation fan; he lives on energy drinks and barely sleeps, spending his days working on music and his nights absorbing Internet memes by the hard-drive load. Mux Mool's homespun electro hip-hop is the product of an introverted mind, an extroverted imagination, and a bottomless cultural appetite.

Lindgren's life in music began in Minnesota with a cheap toy sampling keyboard ("I remember being so fascinated by how much a sound changed when you dropped it down several octaves"). Flash forward a few years (and more than a few keyboards), and the teenage Lindgren began recreating his favorite sounds Dilla's stutter-step beats, classic video-game music, abstract electronic noise using software and digital effects, glazing them with tape hiss and vinyl static.

An early Mux Mool track, the slinky strut of "Lost and Found," was discovered by Moodgadget Records and released on their Rorschach Suite compilation, eventually finding its way onto iTunes' Best of 2006 Electronic list. A string of EPs, tracks, and remixes followed, including the song-a-day project Drum EP, the grimy talkbox anthem "Night Court" on the Ghostly International/[Adult Swim] comp Ghostly Swim in 2007, and the Ritalin-fueled "Ballad of Gloria Featherbottom" on 2009's Moodgadget-curated Nocturnal Suite on Ghostly. Mux Mool's 2010 full-length debut, SKULLTASTE, is the culmination of years of toil and experimentation, gathering Lindgren's myriad talents and obsessions into one gloriously sprawling document.

As for where he got that name, Lindgren offers up an oddly telling story: he was dubbed Mux Mool by a band he admired, after he posted a blog on MySpace soliciting fans to submit names for his project. "Mux is short for 'multiplexing,' which is the streaming of many types of information through one channel," he explains, "and Chac-Mool is an ancient Meso-American statue of a reclining man." A technologically complex breed of synthesis and a timeless piece of indigenous art. Sounds about right.

For over 17 years, Danny Corn has been on the vanguard of electronic music, leaving the trends to other people. As a DJ, he is known as an instrumental player in the formation of the "west coast" sound. Over the years Danny Corn has traveled extensively and played with just about everybody who has made moves in the scene. A champion of syncopated, bass heavy music, Danny Corn rides the edge of experimental sounds, whilst staying firmly committed to the dancefloor. Portland, OR has found Danny Corn taking time to channel all of his experience into music production. His current sets are a eclectic mix of originals, exclusives and personal favorites.

Ghost Feet is an electro-acoustic duo composed of Calvin Erdal and Rachel Dubuc. The release of thier debut EP Wires and Chords on Dropping Gems has introduced a world of listeners to their brand of glitchy head-nodding ambience. Receiving coverage and acclaim from notable sources all over the internet, including XLR8R and Resident Advisor, Wires has demonstrated the spectrum of emotions the duo are capable of commanding. Their live show takes things a step further, introducing audiences to a full experience sometimes only implied on record. As Calvin recreates the busy percussion and Rachel strums out dusky melodies on her guitar, the tones and rhythmic shape of their music take on a massively visceral quality. The effect on the members of the audience is clear to anyone in attendance: dancing and hypnosis, to be found in equal measure.

Seattle native DJAO, aka Alex Osuch, has been a DJ for over a decade, but the last two years have seen him shift focus towards his work as a producer. It began at the in-office studio of a former employer, where he was permitted to come in after-hours and hungrily experiment late into the night. It's been in the past year, however, that his music has really begun to take shape and flourish. After joining up with Dropping Gems, Alex began to produce in earnest, and his live performances have since evolved on a nearly show-by-show basis. His music covers a wide swath of the electronic spectrum, with no ultimate plan to settle on any single style. Instead it exemplifies the progressive tradition of mixing elements from different disciplines into a cohesive whole, in service to a central harmonic vision.

"Soon after moving from NYC to Seattle, JT learned motorcycle and lived on the Pacific Coast, Vancouver > Tijuana for almost a year. When he got back, Hooker built an audio/ visual mobile station and started 12hr notice events- mostly guerrilla-style street parties, announced the day-of. In March '10 at the now-defunct THE HOLE, Hooker helped throw some amazing after hours and curated the Open Wide film/ installation/ photography event.

With various years under his belt exploring diverse public and private audio/ visual/ installation experiences, JT helps bring the party inside to Seattle bars + clubs. Hooker DJs eclectic tunes, runs refined and dirty beatbox effects over other DJs, and creates live, customized video projections and lighting installations at stunning spaces in Seattle + beyond. Hooker was The Uniting Souls' resident VJ for their well-respected ((DIALED)) parties throughout 2011, and is currently DJ'ing at some of Seattle's best parties. JT's also the newest member of seattle's craziest punk outfit //KURLY SOMTHING//