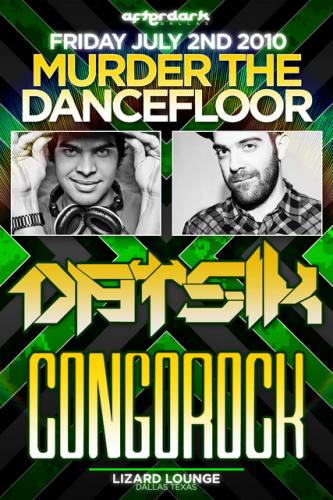 What: Murder The Dancefloor w/ DATSIK vs CONGOROCK

Datsik BIO
Only in the Dubstep scene a short time, 21 year old Datsik (Troy B.) has wasted no time by making his presence be known internationally, introducing his own unique style of industrial sounding futuristic beats and heavy dance floor stomping rhythms. His latest successes on the Beatports “Top Download” charts are a testament that his music is being recognized by listeners all over the world, with multiple releases hitting number 1 on Beatport and Chemical-Records for extended periods of time. It is very well possible that he has been the first dubstep artist to ever hold 5 out of the top 10 best selling tunes at once on Beatport. He has also earned the attention of some of the most notable and influential acts in the scene to date such as Bassnectar, Skream, Rusko, & DJ Craze, to name a few. With the Rottun Recordings label behind him, he has been hard at work, working on many tunes, collaborations, and remixes for some of the biggest names in the world. In a genre with increasing popularity, he continues to devote his time and energy into pioneering a distinct sound that will transform it to the next level, and set him above the rest. He has demonstrated his skills time and time again to packed audiences, on each occasion leaving them in a state of disbelief.
Congorock Bio
We don't know who's been spiking the San Pellegrino but we hope they never, ever stop, because Italy has been producing a slew of interesting ... (more) new electronic producers as of late. The latest and greatest of these rave exports is Rocco Rampino, better known to partygoers around the globe as Congorock, and Fool's Gold is proud to introduce his bleeped-out, bass-heavy brand of club sonics to the world at large.
Congorock's debut single "Runark" is a buzzing four-and-a-half minutes of heart-attack breakbeats, ghetto house thump, and Sega Genesis synthesizer madness. The chunky anthem serves as a perfect calling card for this young producer, who in the space of a few months went from drumming in a hardcore band, to chopping up beats with his mentor Bob Rifo of the Bloody Beetroots, to producing hyperactive remixes for the likes of Rex The Dog and Boys Noize Records' DJ Edotronic while touring the globe off the strength of his sweaty and imaginative DJ sets.
"Runark" comes backed with an awesomely proggy remix by FG labelmates Jokers Of The Scene, as well as the jacking Congorock originals "Exodus" and "Hybro," all wrapped up in psychomystical sleeve art from Dust La Rock. The digital release also features an exclusive new "Runark" mix by His Majesty Andre (Cheap Thrills).