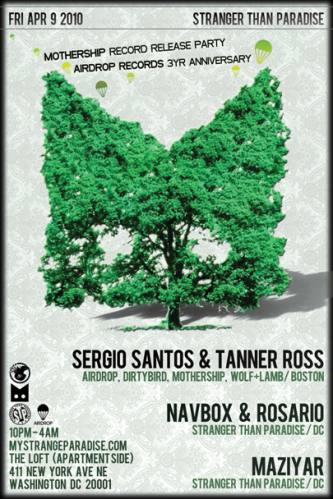 Fri, Apr 9, 2010
Doors 10PM, 21+
$5 before 12, $10 after
The Loft (Apartment Side)
Use Entrance Inside Loading Dock
411 New York Ave NE
Washington, DC 20001
-------------------------
Mothership Record Release Party
Airdrop Records 3Yr Anniversary
Stranger Than Paradise Loft Edition
http://MyStrangeParadise.com
-------------------------
Sergio Santos & Tanner Ross
(AirDrop Records, Dirtybird, Mothership, Wolf+Lamb, Boston)
http://myspace.com/djsergiosantos
http://myspace.com/tannerrossbeats
NavboX & Rosario
http://myspace.com/navbox
http://myspace.com/rosbox
Maziyar
About Sergio Santos & Tanner Ross:
Tanner Ross is best known for his part in the homegrown mothership techno duo called Voodeux. He recently ﬁnished his degree in music studies from the renowned Berklee school of music in Boston and has also made several appearances under his own name on Dirtybird. A veteran DJ, Sergio Santos 1st appeared on Wolf+lamb and Airdrop last year. He also happens to be Tanner's room-mate. So it's no surprise that these two ended up working together on some music.
While everyone chases the house dragon, these guys sound like they are smoking weed with your girlfriend on a chocolate star ship headed for Neptune. The beats stick to your gut like smoked ribs and the sound shimmers and shakes like a techno funk band.
Sergio Santos is hands down, one of the most talented DJs on the coast, with well over a decade's experience playing clubs around Boston, as well as European and national dates, his style can vary to satisfy many crowds. His last two performances in DC were nothing short of magnificent. As of 2009, Tanner Ross has had the opportunity to play to crowds at The End Up in San Francisco, The Watergate in Berlin, and Fabric in London amongst others. Coupled together, they bring great energy to the room.
Record Label Links:
http://airdrop.com/
http://dirtybirdrecords.com/
http://mothershipmusic.com/
Check out Tanner Ross & Sergio Santos' mix for Mothership:
http://www.mothershipmusic.com/tanner-ross-and-sergio-santos-mix
Check out Rosario's latest podcast for MurmurDC.com:
http://www.murmurdc.com/2009/12/16/murmur-dc-podcast-episode-11-rosario/
NavboX's latest mix on SoundCloud:
http://soundcloud.com/navbox/navbox-deeper-mixtape-mar112010 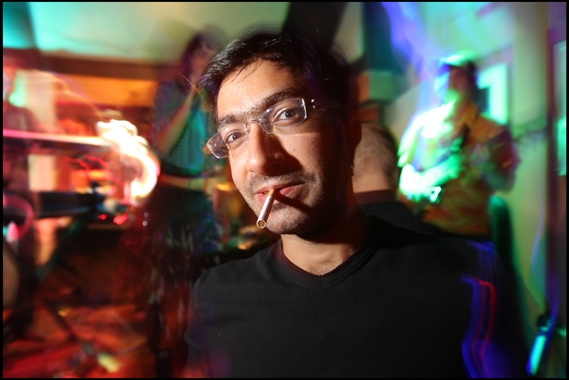