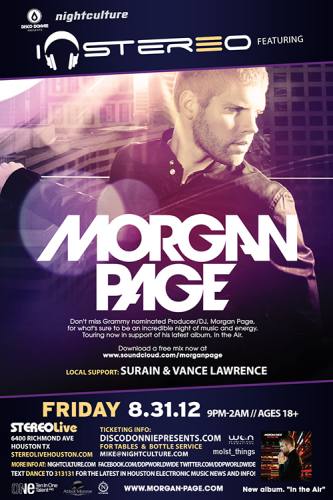 With over 130 remixes to his name—including tracks by Madonna (“Miles Away”), Katy Perry (“I Kissed A Girl”), Tegan & Sara (“Back In Your Head”), and La Roux (“Bulletproof”)—Morgan Page has earned a solid reputation for transferring insatiable pop energy to the dance floor in the form of banging, progressive house tracks. High ranking spots on iTunes’ dance chart, Beatport’s progressive chart, and Billboard’s club charts affirmed his salability, while an ’09 Grammy nomination for Deadmau5’s remix of Page’s “The Longest Road” simultaneously bolstered his underground cred while spotlighting his skills as a songwriter. Page released his first official full-length album in 2008. Entitled Elevate, it featured remixes of music by The Submarines, Dengue Fever, Nelly Furtado, Delerium, and others, along with a small handful of Page’s originals. It was the perfect calling card for a producer well steeped in vocal re-rubs, but eager to imprint his own unique mark upon dance music. In 2010, Page will release Believe, a powerful, captivating album that makes good on his International Dance Music Awards nomination as Best Breakthrough Artist, and typifies his journey from bootleg remixer to award-winning producer and world renown DJ. “Believe took a year and a half to make, but it was worth it!” says Page. “I went to great lengths to make songs I felt will last a long time, and to create an album you want to listen all the way through. It's easily my best work so far.”