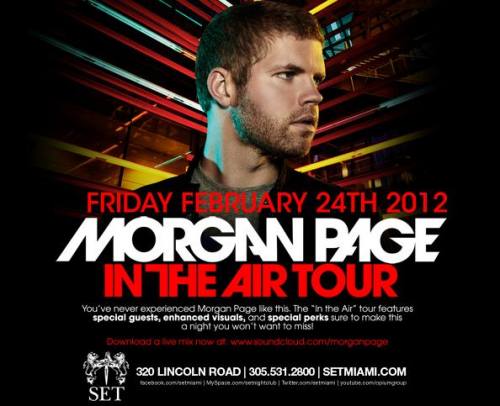 GRAMMY-nominated Remixer and world-renowned DJ/Producer, MORGAN PAGE made a name for himself with 2005's collection of bootleg remixes, Cease And Desist. Getting the blogosphere chattering, he began carving out a niche. In 2008, he dropped his formal debut Elevate, which spawned one of his biggest hits to date "The Longest Road" featuring songstress, Lissie. The Deadmau5 remix of the track was nominated for a Grammy (Best Remixed Recording, Non-Classical) in 2009. His sophomore effort, 2010's Believe, saw him continue to garner even more critical and fan acclaim. The accolades didn't stop there though. In 2011 his remix of Nadia Ali's "Fantasy" received a Grammy nomination for Best Remixed Recording, Non-Classical. In the meantime, he also received three International Dance Music award nominations. While touring and dropping records, Page managed to produce close to 200 remixes for everyone from Madonna and Katy Perry to La Roux and Florence the Machine. Most recently, he's remixed legends Daft Punk ["Solar Sailor"] and Underworld ["Diamond Jigsaw"]. Join us as Morgan Page presents the In The Air Tour ast SET Nightclub in Miami Beach.