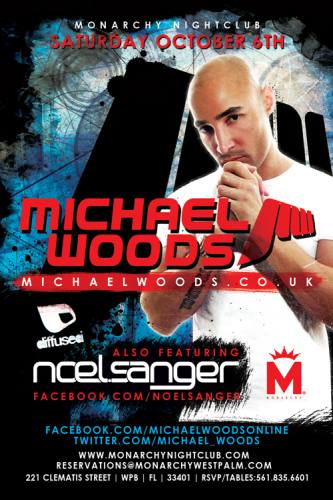 Ability, originality and accomplishment. In Michael Woods' short career he hasmanaged to touch on every cornerstone, leaving proof of his musical competenceat producing big room, progressive and tech-house tracks, along with adiscernible motivation to better the quality of music being distributed. Thishas not gone unnoticed with DJs like Pete Tong consistently throwing props hisway.

From Argentinean & Guyanese decent, he was born and raised in HackneyLondon which he still calls home and runs his studio from there. Classicallytrained in a range of instruments at an early age provided Michael with acatalogue of creative skills including the keys (which he learned to play atthe tender age of 3), guitar, drums and trumpet, practically making him a oneman band. When not in the studio messing around with Logic, developing hiscraft, he would be found at Pimlico’s Trinity Music College where he contracteda love for musicality, often using his spare time orchestrating with thepercussion section of the London Symphony Orchestra.

Earlier achievements include his debut single, "Warrior" released in2000 and the critically acclaimed remix of Energy 52’s "Café DelMar", both of which are still considered as classic’s among DJs and fansalike. But today’s finished products could not sound more different. They carrya deep, driving and delectable collection of electronic sounds, with melodious,cascading synths and hands-in-the-air rush-inducing drops. This is what MichaelWoods is renowned for, and has created an individual sound that he ispioneering, making him a stunning example of an artist that flows with, as wellas initiates, music’s changes.

Collaborations with the likes of Chris Lake, Funkagenda & Mark Knightconclude as featured tracks on various compilations and act as proof of hisskillful production abilities. It’s alliances like these that excite thegrowing fan base, but are not the sole examples of his talent, as originaltracks such as "Nitro", "Midnight Run","Dynamik", “No Access” and "First Aid" are continuallysupported.

Alongside an impressive catalogue of tracks on numerous labels includingMau5trap, and Toolroom Records, many established artists such as Underworld,Martin Sloveig and Moguai have hired Michael Woods to renovate their sound intoa style which emulates his musical vision, including the Deadmau5 & ChrisLake’s “I Said”, which became the only remixed track featured on the 2010album, “4x4=12”. In addition, mainstream artists such as Kylie, Estelle, TheTing Tings, The Temper Trap, P Diddy and Ginuwine ft Timbaland & MissyElliot have all borrowed his insatiable remixing skills, leaving his studiorarely empty. His ability to rework music with an exceptionally sharp ear forquality production has left him in high regard with many artists and labelsacross the industry, leading to a nomination for ‘Best Remixer’ at this year’s2011 IDMA's (International Dance Music Awards).

Michael Woods now borrows some of this growing respect offering it to hislabel, Diffused Music, which houses applauded tracks from him self and others.The rapidly growing label is another imperative ingredient in furthering theexhilarating Michael Woods history book.

As well as the continuous success of his music, his dexterity as a DJ completesMichael Woods as a dynamic and credible artist. In demand across the globe heplays everywhere from Europe to USA, ending 2010 with a successful USA Tour.Other accomplishments to-date includes a summer residency for Cream at Amnesiain Ibiza (2010), while Deadmau5 invited him on his infamous 2010 UK tour. Thelatest addition to Michael's ever increasing list of successes is being crownedthe new global resident at one of dance music’s biggest super brands: Ministryof Sound. With industry heavyweights like Fedde Le Grand, Benny Benassi andMark Knight as his peers, this is yet another triumph for Michael Woods andmarks his growing importance in dance music today. After a year of unprecedentedsuccess, this residency is another milestone in his career, which sees MichaelWoods playing as the face of the Ministry worldwide for a whole host of events,adding his name to the array of esteemed DJ’s that already accompany theMinistry brand and reputation.

For 2011, Michael Woods continues his relationship with Ministry and kickstarts a new series of mix compilations for the brand, aptly entitled Ministryof Sound – Residents. Not a first for the artist, after the infamous Amnesiadance-house honoured Michael by asking him to mix one side of the “AmnesiaIbiza Deejay Sessions vol.6” compilation to accompany the Cream summerresidency. All are prime examples of the ever growing popularity of MichaelWoods, where his presence is always well received by fans and top clubs alike.It is clear that his creativity knows no bounds, and each attainment is justanother chapter of this musical characters story.