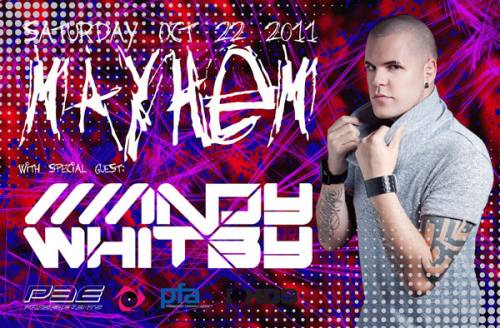 Andy Whitby is the whirlwind hard dance was waiting for – a refreshing and creative force at work. He is widely acknowledged by his peers as leading the forward charge, and constantly pushing the boundaries of the harder side of dance music.

One of the most popular stars on the hard dance scene, he has risen through the ranks with consummate ease – his passion, talent and affinity with his audience... helping to propel him into the limelight in double-quick time.

His unique style and presence behind the decks – his sets are created using a mixture of his own productions, re-edits and bootlegs – combined with complete dedication to bringing the music to the masses has rewarded Andy with one of the biggest and most loyal fan base within the genre, resulting in him winning Best DJ, Best Album and Best Resident at the Hard Dance Awards.

With a total of ten years DJing experience under his belt, he has played every major hard dance event in the world. His style of feel-good euphoric hard dance, mixed with unlimited tricks, chop ups and edits marks him as a pioneer in the hard dance scene.

On top of this, Andy has created and grown a monolith brand, AWsum, which is comprised of no less than eight labels, an event production arm and a clothing range.

Staging ambitious stand-alone club events and teaming up with household name brands such as Godskitchen’s Polysexual and Atomik, plus hosting an arena at the massive underground dance festival, Westfest means Andy Whitby can add another string to his bow - becoming a credible and relevant event promoter. Andy says his attention to detail and knowledge of his crowd – he is in his early 20s himself – are the key to the success of his AWsum events.See More

w/ the best in Seattles hard locals including