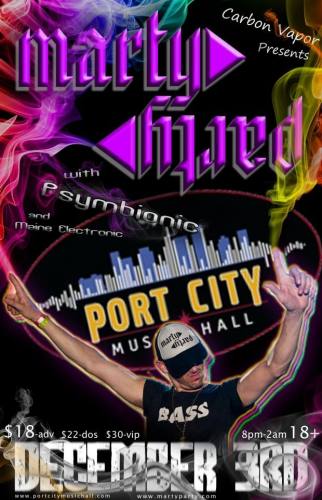 What: MartyParty w/Psymbionic and Maine Electronic

MartyParty is coming back to Maine for another blowout this December with Psymbionic and Maine Electronic!! If you thought the last show was epic just wait. Marty has a brand new EP coming out along with 64 additional brand new tracks. Check ou...t his Website for tons of free music and get ready for the best show of 2011!

As a part of the upcoming generation of electronic music producers, Psymbionic creates aural experiences that demonstrate the possibility for multi-tempo Bass Music and culture to exist within a range of more divergent influences.

With this latest project, John Burcham has been moving bodies and turning heads for several years, playing with acts such as Bassnectar, STS9, Beats Antique, ill.Gates, Excision, EOTO, and Tipper. In addition to festival appearances that include Nocturnal, Wakarusa, and Sonic Bloom, Psymbionic demonstrates heavy involvement both on the stage and behind the scenes at electronic showcases such as his local SXSW in Austin, TX. Burcham’s work informs his repertoire with roots in the furthest reaches of the electronic music scene, and grants him a unique perspective on each crowd through the latest developments of the industry.

In a live show context, Psymbionic confronts mixes that are limited to the scope of the build and release, avoiding an industry epidemic of drop-monotony that overpowers the flow of music. Burcham seeks to prove that there are more powerful influences in moving a crowd than simple tension, providing an interwoven dynamic that relies on the strength of his blend, rather than the sole force or familiarity of the apex.

Psymbionic's theory of music is a journey that doesn't visit the same place twice, building excitement for what's next not because you can anticipate it, but because you've never been there before.